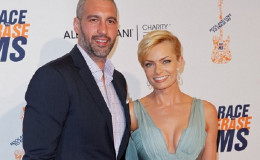 Double trouble, maybe not, but adorable!!

The newbie mother who announced her pregnancy back in June this year already has a son from the previous relationship and now with the addition of two little ones,  they're a big family of four!

Jaime Pressly and boyfriend Hamzi Hijazi are giving us parenting goals. Although not married, the pair is already living a blissful life together as they just welcomed their twin babies, sons, Leo Hijazi and Lenon Hijazi on October 16, 2017.

The adorable pair waited until yesterday to announce the big news through an Instagram post where she posted the pictures of happy healthy twins.

The 41-year-old actress who was engaged to ex-fiance DJ Eric Calvo announced that she was expecting twins via Instagram post in June. She has a 1o-year-old son Dezi James Calvo with Eric.

This news came as a pleasant surprise for the couple as before this she told in an interview with Us Weekly that they were trying really hard to conceive babies and even thought of surrogation or IVF. 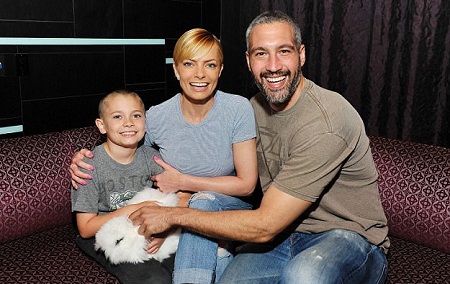 But fortunately, she got pregnant and had it checked five times to reassure which was without a doubt a positive one. She stated,

"I went and got a Clearblue test and then had Hamzi go back to the store and get about five more because I was like, ‘Oh, my God!"

But this is not it guys! Their happiness doubled when they heard two heartbeats in the ultrasound and found out they were having twins. She said,

We were in the ultrasound and we just wanted to hear the heartbeat for the first time and much to our surprise, there were two heartbeats. I didn’t understand what I was looking at on the screen because there were two sacs and two little heartbeats and I’m like, ‘What exactly are we looking at? Is everything all right?’ We were in shock,”

Pressly was also married to entertainment lawyer, Simran Singh back in 2009 after dating for about a year since 2008. The duo, however, filed for divorce, citing irreconcilable differences which were finalized on January 21, 2011.

Soon after she started dating boyfriend Hamzi Hijazi and now they have been together for almost five years. Well, all in all, we wish this couple a big congratulation and wish them best wishes for their future endeavors.

Just look at the happy face of Hijazi of being the father of twin babies.

Not just Hijazi but Pressly is also super excited and proud to be the mother of three.

#happyholidays from me and my boys! If only they actually sat this still off camera. Ha! To all the awesome moms out there who do it all, I hope you’re enjoying some well deserved down time right now. Lord knows we all need it. #merrychristmas @johnrussophoto

Her Instagram posts explain her happiness to the fullest.

Well, we are waiting to see the lovely pair getting married soon!