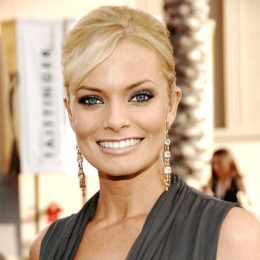 Jaime Elizabeth Pressly, one of the well known American actress and model is best known for her role as Joy Turner on the NBC sitcom My Name is Earl. She was nominated for two Emmy Awards, Golden Globe Award and a Screen Actors Guild Award for the same role. Poison Ivy: The New Seduction, Joe Dirt, Dead or Alive and I Love you,man are some famous movies in which she had played.Her mother Brenda is a classical dance teacher and her father James is a car salesman. Before taking up modeling at 14 years old, she had studied gymnastics and dance for 11 years. Her first cover was on Teen Magazine.

Pressly who was dating DJ Eric became pregnant and they got engaged in October 2006. She gave birth to their first child Dezi James Calvo in Cedars-Sinai Medical Center.

#happyholidays from me and my boys! If only they actually sat this still off camera. Ha! To all the awesome moms out there who do it all, I hope you’re enjoying some well deserved down time right now. Lord knows we all need it. #merrychristmas @johnrussophoto

They were friends since 1996 but after the engagement, the relationship didn't fonder and the couple announced their separation in November 2008. After a year in 2009, she was engaged to an Indian entertainment lawyer Simran Singh. The couple got married in the same year but didn't last long.

They divorced in 2011. Upon being rumored to be married to a man named Brodie Mitchell in 1998, she cleared the air in an interview to pacepress.org by stating that she doesn't know the man at all.

She announced that she was expecting twins with longtime boyfriend Hamzi Hijazi on 7 June 2017. She gave birth to twin sons Lenon and Leo in October 2017.

She posted an image with late actor Luke Perry and expressed heartfelt condolence for the bereaved soul on 5th March via Instagram post.

I still can’t digest that this incredible soul is gone. He was one of the loveliest, kindest, most genuine human beings I’ve ever had the pleasure of knowing. You will be missed my friend. #rip #LukePerry

She is renowned for playing in the NBC sitcom My Name Is Earl.

Pressly got engaged to Simran on July 2009 and they married in same year on September 26 at the Dick Clark Estate. But after two years the marriage ended on January 21,2011 with divorce because of some irreconcilable differences.

Pressly gave birth to their first child on 11th of May in 2007 at 7:31 a.m. in Cedars-Sinai Medical Center. The child got his last name to reflect his father James Calvo's Cuban heritage.