Home Article Elizabeth Vargas and former Husband Marc Cohn still together for their Children; Details of their failed Relationship

Elizabeth Vargas and former Husband Marc Cohn still together for their Children; Details of their failed Relationship

Yet another star couple took a break in their relationship. Elizabeth Vargas, the American journalist, and Marc Cohn, who lived a wonderful life with two kids finally separated in 2014 with an official divorce.

After a long-suffering and struggle of alcoholism and anxiety, the TV personality Elizabeth Vargas is finally living a sober life with her children. The popular anchor of ABC's television newsmagazine 20/20 faced a lot of problems due to her addiction.

She was married to Marc Cohn in the year 2002 but the couple divorced in 2014. They are still good friends and are trying their best to be responsible parents of their two children Zachary and Samuel. It has been three years since her separation, so, what is her current relationship status? Is she dating someone? Who is her boyfriend?

What Is The Current Relationship Status Of Elizabeth Vargas?

Vargas, 55, a truly hardworking television personality is currently working as an anchor of ABC's newsmagazine 20/20.

After struggling with alcohol addiction and anxiety, she spent years in rehab. She is currently living an addiction-free life, and as per the sources, she is not dating anyone. She is busy with her work and children and has no time for the relationship.

Elizabeth with her sons Zachary, 13 and Samuel, 10
Source: Daily Mail.

Well, we can just say that the star is most probably single at the moment.

Elizabeth Vargas-The Story Behind Her Divorce With Marc Cohn

Elizabeth faced the biggest shock when she came home from a Tennessee rehab back in the year 2014. She spent some time in the rehab to fight against her alcohol addiction.

Some sources addressed that "Walking in Memphis" songwriter Marc Cohn had an affair with Flywheel co-founder Ruth Zukerman while the ABC anchor was struggling in the rehab. 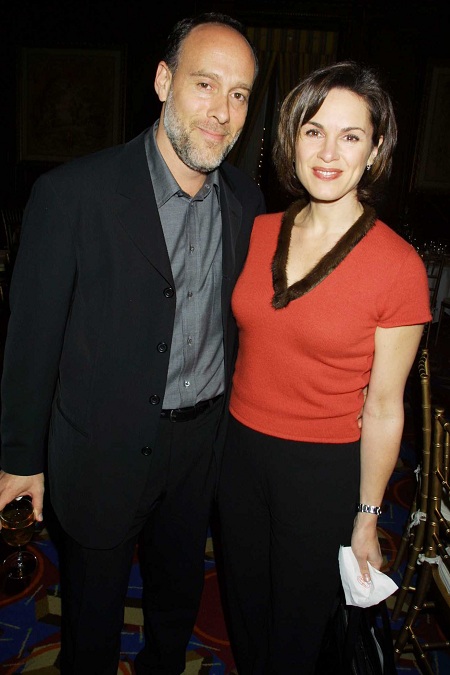 Elizabeth and her former husband Marc; the couple married in 2002 and divorced in 2014
Source: Page Six

Elizabeth and Marc married in the year 2002. But the relationship faced a lot of issues because of her alcoholism.

Cohn thoroughly denied the rumors about his affair with Ruth. He said in an interview in 2014,

"I will not comment on what is an extremely sensitive and private family matter – addiction and recovery are serious challenges and it’s been a tough road for all of us. I have been supportive of Elizabeth in the past – and will continue to be – regardless of the long-standing issues in our relationship."

A source close to Cohn said,

"This isn’t a case of a husband wronging a wife while she struggled with her personal problems. Their marriage has struggled for a long while, but he has been a supportive husband and a loyal dad."

But that was a tragic moment for Vargas. The 20/20 anchor's memoir "Between Breaths: A Memoir of Panic and Addiction" is all about her addiction to alcohol, rehab and failed relationship.

Happy birthday to my little man. Eleven years ago today you arrived! May all your birthday wishes come true

Though the former couple is not together, they still have a strong bond co-parenting their sons Sam and Zach. She said,

"We both love our children and we will be in each other’s lives for the rest of our lives because of these two amazing boys. I think we both focus on that."

Apart from her unsuccessful married life, her relationship with Michael Douglas was also the talk of the town. She has also mentioned about her dating life with the famous actor in her book. They dated in the 90s, but the relationship did not last long.