See the beautiful relationship of Benjamin Hoeksema and actress Rose McIver: Couple might get married soon 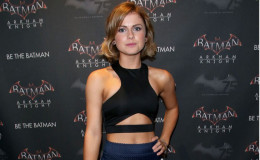 Benjamin Hoeksema is an architect who is in a long-term relationship with his girlfriend 'Rose McIver'. They are together since 2008 and it's been almost 9 years of their togetherness.

Benjamin Hoeksema who is an architect is also known as the boyfriend of a beautiful actress 'Rose McIver'.

Their relationship is the cutest thing in Hollywood because they belong to different fraternity; Rose is a famous celebrity whereas Benjamin is a normal guy. However, Hoeksema prefers to keep their love life secretive from the media.

Being one of the favorite couples, their fans always sought to know more about them and if you are one of them then you have visited the right page because today we are going to provide every update related to their relationship.

Benjamin Hoeksema and Rose McIver's Love life: Are They Still Together?

Benjamin Hoeksema and Rose McIver aren't married yet but are soon planning to walk down the aisle in a lavish ceremony attended by some friends, co-stars and family members.

For sure, Mciver and her architect boyfriend will someday get hitched as they've already dated for a decade. The lovebirds have been kindling romance since 2008.

Regardless of all, McIver doesn't want to broadcast her personal life among the media. And, her desire of privacy is one of the reasons you won't find much information of the past affairs she may have in the past.

Later, they turned their friendship into a beautiful relationship. Nonetheless, some sources claim that Benjamin and Rose knew one another from 2005. They never had any children amid the longterm affair.

There was always a rumor of their relationship but officially they never admitted it. However, in 2009 when Benjamin and Rose appeared together at the premiere of The Lovely Bones it became official.

After that appearance, they were never seen together but it doesn't mean they have split apart because they are very secretive about their relationship and they don't want any interference of media.

If we checked their social sites also we can't get their pictures together. According to the source, they need more time to admit their relationship officially and we hope that the right time comes soon because we can't wait to see them together.

Despite that, there aren't any rumors of their split and having affairs with someone else.

In August 2011, McIver and Benjamin moved together from Wellington to Los Angeles in their new home and at that time many people assumed they are married. However, this rumors don't contain any truth.

Benjamin and Rose are in a live-in relationship and most of the people confused them as husband and wife.

Though the lovely couple spread marriage rumors in the past, it seems the two have parted ways and moved on; and see we had no idea about it. Scrolling down her recent Instagram posts, it is all clear that she's spending much time with a guy named George Byrne.

Well, they haven't confirmed their relationship in mass. Her fans are adoring the lovely pair and congratulating them.

Most importantly we don't find Hoeksema in her current posts.

While people still talk about McIver and Hoeksema, it seems McIver has something to disclose in her life. Look at her Instagram post below:

Happy Birthday @george_byrne. You make me so happy. I love you

Has she moved on in her life? Well, let's wait until them to reveal the actual story!