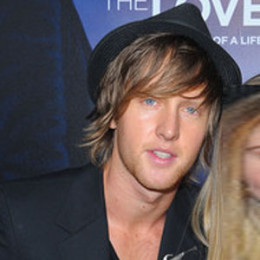 Architect, Benjamin Hoeksema is well known as a partner of Rose McIver, a New Zealand actress. His partner Rose starred in television movies including the Hercules film series and Maiden Voyage, as well as two Disney Channel films: called Eddie's Million Dollar Cook-Off in 2003, and Johnny Kapahala: Back on Board in 2007, the sequel to the 1999 film 'Johnny Tsunami'.

Hoeksema and the 31-year-old actress are no more in a relationship. Indeed, The Royal Wedding actress has moved on with someone new in her life. She is romantically linked to a man named, George Bryne. She even took a photo of themselves cuddling around which is a hint of their blossoming romance.

Benjamin Hoeksema, an architect allegedly lived an ordinary life before he was speculated for being in love with the actress, Rose Mciver. Well of the fans are probably unknown about the actual deed of the affair between the pair.

In August 2011, the blue-eyed moved out and shared a house in Wellington with his long-term girlfriend, Rose McIver. She later moved to Los Angeles, where she lived in the neighborhood of Silver Lake.

Benjamin and Rose began dating since 2005 and the couple is in a live-in together relationship. The couple lives in a long-distance relationship but their bond is still going strong despite all the odds.

Rose, who is an actress by profession, is famous for iZombie, Once Upon a Time and, The Lovely Bones. In an interview, Rose has stated that she talks to her boyfriend via Skype and she generally connects with her loved ones only on Sunday.

According to her, it's the faith that they have in their relationship that has kept them from falling apart. She is usually taking fleeting trips to her hometown to meet her parents and boyfriend. During her trip to Aukland, she sometimes stays at Benjamin's place and sometimes in her family's house located at Titirangi, Aukland.

Benjamin, as well as his sweetheart, have kept their romance extremely secret and away from the public. Needless to say, it is rare to see the duo together nevertheless it was one of the premieres of Rose's movie "The Lovely Bones" where the lovebirds had their pictures clicked together.

Even though Hoeksema loves sharing the snaps of his daily life schedule in his socials, he hasn't posted the single pictures of his lady love that could be the evidence of his relationship status.

What is Benjamin Hoeksema's Net Worth?

Benjamin Hoeksema definitely earns big bucks from his profession as an architect. The average earning of any given architect located in Aukland is around $40k.

On the other hand, his girlfriend, Rose McIver has an estimated net worth of $500k. The main source of her income is her acting and modeling career.

Benjamin Hoeksema is an architect by profession. He currently works at the Hoeksema Decorating Limited, which is an Auckland based decorating and architectural company. The company was first located at Grey Lynn, Auckland.

The company has been classified into the category of House Painting. His company generally takes contracts on house painting and decorating.

Benjamin Hoeksema was born in Auckland, New Zealand. He received his education from a local high school before he went on to graduate with a degree in architecture.

From his early days, he was pretty much interested in design and decoration leading up to his profession as an architect. He is a New Zealander by nationality and belongs to Caucasian ethnicity. Benjamin is an avid pet lover; he frequently posts the picture of cats and dogs on his socials.