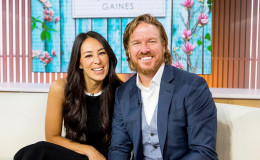 This is a moment to cherish for Fixer Upper fans as their favorite HBTV pair is all set to welcome their fifth child.

Yesterday, the duo, Chip Gaines and Joanna Gaines took to Instagram to share the news with their fans and relatives.

Earlier, it was confirmed that Chip and Joanna are all set to take a departure from their hit décor show, Fixer Upper at the end of the running season.
Late though, fans finally know the reason behind them leaving the show. Now when the announcement of the arrival of Chip and Joanna's fifth child is made, we have brought you some exclusive details about the child below.

1. This will be the couple’s 5th child

The hit pair of Fixer-Upper will welcome their fifth child together this year. The new one will join other siblings Drake, 11, Ella Rose, 9, Duke, 8, and Emmie Kay, 7 in few months.

2. Chip Strongly Feels the Baby is a Boy

Though confirmed news about the gender of the child is still under wrap, the father of the unborn, Chip Gaines, has a strong feeling about the baby to come out to be a boy. Chip said, he can already tell it’s a boy.

When chip announced about the baby, he mentioned that they conceived the baby during the Johnnyswim concert. If we trace details of the pregnancy Joanna is currently 13 weeks pregnant with her fifth and that takes the due date in July 2018.

Well, the heavenly couple welcomed their fifth child in June 2018 and the proud father announced the news via Twitter post.

Our baby boy, Crew Gaines, is here and we couldn’t be more in love. He made an unexpected (and speedy) entrance into the world two and a half weeks early - which is fitting given he was a sweet surprise from day one. Thank you for all your thoughts and prayers. We are so grateful.

His wife Joanna shared the same image via Instagram post and revealed the name of the baby boy Crew Gaines.