Gator Boys Star Paul Bedard's Personal Life In A Nutshell; Is He Married? 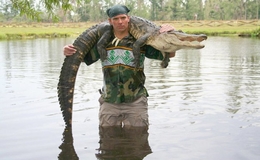 Sometimes, some superhero prefers to wear shorts, a shirt and a cap instead of capes. Seriously, mad respect for men like Paul Bedard for his social contribution on rescuing Florida's reptiles.

Speaking more on Mr. Bedard, this superhero is better known for his appearance on Gator Boys which was first aired by Animal Planet in 2012. But, Bedard had his interests in wildlife way before that.

Born in New England, but raised in Florida, Paul Bedard's fate was destined to be in the wildlife region. Needless to say, he developed his interest in nature and wild animals since his early days. As a matter of fact, his passion for the animal didn't stop him from falling for them more even after suffering a snake bite.

Bedard, however, was originally interested in catching sharks though. But through learning the dangerous risk in the ocean and seasickness, he backed off. That still doesn't mean that he didn't rescue sharks as he released tons of sharks to the Florida Keys.

And, interestingly, Bedard experienced his first catch at the age of only twelve with a rattlesnake in Tiverton, Rhode Island. Then an adult Paul Bedard alongside Jimmy Riffle co-founded the Gator Boys Alligator Rescue to honor the Everglades and for the protection of reptiles.

Not long after that, Animal Planet approached him with a proposal of the show which would later be called Gator Boys. But, although life as a Gator Boy that often puts him in a dangerous life situation with being bitten over thirty times hasn't been easy for Bedard, he doesn't tend to stop doing his work anytime soon.

Okay, enough about Bedard's career. How is Bedard's love life?

Now in his early fifties, Mr. Rescue has quite lived the life as per his wish, that is to serve the animals, of course, to say the least. On the other hand, much regarding Paul's personal life isn't known as much as his professional life.

Does Paul have a wife? Is he even married with kids? It's a must to say that Bedard is extremely secretive when it comes to sharing his personal life details. Paul, however, was once rumored to be romantically linked with a woman called Sarah. But, not strong evidence exists to prove the speculation.

Whatsoever, the public shall respect the decision of Bedard over his privacy policies. But, even if Bedard has that special someone in his life, do you think Paul loves Mrs. Bedard as much as he loves reptiles?