Home Article Nancy Putkoski, former wife of television personality is Tony Bourdain is enjoying her singlehood: Still no boyfriend or a husband

Nancy Putkoski, former wife of television personality is Tony Bourdain is enjoying her singlehood: Still no boyfriend or a husband 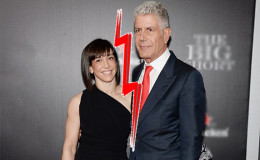 American model Nancy Putkoski is best known as the former wife of Anthony Bourdain, better known as Tony, who is one of the most acclaimed chefs, author and television personality of all time.

Nancy married her high school boyfriend, Tony in 1986. The couple was together for nearly two decades. However, in 2005 they got a divorce. Let's try to find out more about their relationship and divorce below.

The high school sweethearts Nancy and Tony tied the knot in 1986 in front of their close family and friends.

However, her relation with Tony did not go well and the couple decided to separate and got divorced in 2005.

When asked about the reason for the separation, Tony mentioned that 'the extensive travel associated with the job is the main reason.' Nancy Putkoski and Anthony Bourdain during a night out
Source: Imgarcade

In an interview in 2006, Nancy's ex-husband said about his regrets, "She was the love of my life. But everything changed."

There is a famous saying that the "marriages are made in heaven", but keeping a marriage depends on the bond and over-all relationship between a husband and wife.

No matter how many years one person is hitched to the other. If the hearts of the couple do not get along, the relationship will end eventually.

Currently, she seems to be single and not dating any boyfriend. We have not heard any news from her lately. She went completely out of the limelight, after her divorce.

On the other hand, her ex-husband Tony married Ottavia Busia. After being addicted to drugs for a while, Busia came in his life. Let's talk more about their married life.

He once again started dating with Ottavia Busia, mixed martial arts fighter. The pair tied the knot on April 20, 2007.

The couple has a beautiful daughter named Ariane Bourdain born in the same year. They both are happily living with their child.

However, once again Tony had to suffer from the tragic separation with a second wife Ottavia. The only difference was that Busia and Tony have a daughter of 9-year-old.

The reason behind the couple separation was the lack of family time as he spends more than 250 days away from his wife and daughter for work.

The different career paths of the couple which made their conjugal life unstable and they got divorced in 2016.

Till date, he has won so many awards including 'food writer of the year', 'food book of the year' and much more.

Anthony Bourdain died at the age of 61 17 days before his 62nd birthday. The chef found dead on June 8, 2018, in an apparent suicide by hanging in his room at Le Chambard hotel in Kaysersberg.