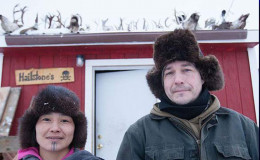 When we hear the term celebrity, we imagine a very good looking star with a glamorous lifestyle, and someone living the good life but this stereotype gets shattered when we see someone like Agnes Hailstone.

She is a reality star who is a native Inupiaq and also a skilled hunter, living off of the land with her husband and family. She is a celebrity out of the normal and although her fame might not be as of high standard as the other generic celebrities, her personal life including her relationship with her husband is highly contentful.

Agnes Hailstone Married Life With Her Husband and Children

Agnes Hailstone, famous for the national geographic documentary, "Life Below Zero", is in a married relationship with husband Chip Hailstone, originally known as Edward V Hailstone. Chip Hailstone was born in 1969, who originally hails from Kalispell, Montana, and later moved to Alaska during her late teen years.

Like Agnes, Chip is a skilled hunter with a great amount of experience who often get compliments for her hunting skills. The couple first met in Noovrik but the information about how exactly they met is unknown.

Also Read: Life Below Zero star Sue Aikens is living all alone after two of her husbands died and the other left her. Know about her failed Married life and Children

After meeting, Chip and Agnes became friends quickly through their common shared interests and gradually after falling in love, the two tied the knot in 1992.

Till date, there is no news of any marital problems and their marriage looks content with blissful happiness. The pair together has five daughters in total including; Tinmiaq, Iriqtaq, Mary, Caroline, and Qutan Hailstone.

Occasionally they take their daughters to join them in the hunts. Their eldest of daughters Tinmiaq, Iriqtaq were initially homeschooled but later they got enrolled in a local school in Noovrik.

The family is from Alaska and chooses to live a robust life as hunters and live off the land by hunting animals and fishing sea creatures like caribou, bear, bison, fish, walrus, waterfowl, seal, etc.

Seasonally, they even move as far as 90 miles in search of the best hunt. Talking about their life, Chip says it is all about food, he said:

The star graduated from Noovrik High School in 2015 and Agnes teaches survival skills to their younger daughters; Caroline and Qutan. With the lifestyle that they have, the hunting rather is a necessity to the Hailstones. And having to have learned how to survive from the land they live in, their daughters are lucky to have a mother and father like them.

Agnes Hailstone Past Relationships and Rumors

Before being with her husband Chip, Agnes Hailstone was in a serious relationship with an unknown person in her youth. The only information known regarding her ex-partner is that his last name is Carter. It is said, they got along with each other very well and their relationship was going really good.

Their romance eventually turned into marriage and she lived with her first husband for quite some time but like most couples married at an early age, their young love started developing various issues and began to fall apart.

Agnes with her husband Chip

Take a look at how much does Agnes and Chip earns from the show!

There is no information other than this about her first spouse but regardless of her past, she seems happy to have moved on and looks like life has turned out for the best for this inspirational hunter.

For more news, stay on marridwiki.com.