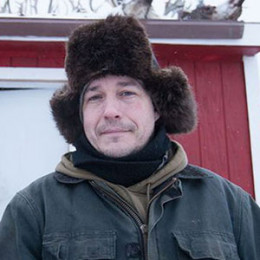 A hunter, trapper, harvester, crafter, and reality TV personality Chip Hailstone is better known for his appearance on the reality TV show Life Below Zero which is broadcast on the National Geographic channel. He is a happily married man and married to Agnes Hailstone, a native of Alaska. Together the pair is blessed with seven children, five daughters, and two sons.

Chip Hailstone was born on March 8, 1969, in Kalispell, Montana in the United States. He was born to the parents Mary Lois Hailstone and Daniel Franklin Hailstone. He belongs to American nationality and White American ethnicity. His birth sign is Pisces.

Hailstone graduated from the local high school of Kalispell, Montana. Since his childhood years, he was interested in the craft and skills of hunting. He came to visit Alaska from Kalispell in and he never looked back. He had no plan to stay in Kalispell, but the chance to hunt and craft appealed him.

He is a hunter and uses his antique rifle as well as rocks to hunt in this remote area. He has been hunting, harvesting, gathering raw material, fishing, skinning, tanning, and crafting for the past two decades.

You May Like; Sue Aikens' Family, Net worth, Facts, Bio, Wiki

He is one of the cast members of the reality series Life Below Zero, which broadcasts on the National Geographic Channel. The show follows him and his family who make their living in remote areas of Alaska.

His wife Agnes Hailstone was also included in the ninth season of the show in 2017.

The primary characters of the show include Andy Bassich, Sue Aikens, Erik Salitan, Glenn Villeneuve, James Franzo and the couple themselves. To survive the weather, storms and man-eating beasts, all the people are involved together in the show and struggled as they hunt and depend on themselves.

Both the couple has the expertise to live and survive despite the weather condition. From the BBC Documentary, they got huge fame and that also adds a great fortune to their bank balance.

The couple use parts of the animals like teeth, skin, and bones to make arts and crafts to sell.

Chip Hailstone is a married man. He married to Agnes Hailstone Inupiaq native of Alaska, girlfriend, for a long time. The couple has altogether seven children including five daughters, Tinmiaq, Iriqtaq, Mary, Carolina and Quran and two sons Douglas and Jon, from Agnes Hailstone previous marriage with Carter.

The pair first met in Alaska, after Chip moved there from Kalispell, Montana. Along with their seven children, the couple lives in a traditional Inupiaq subsistence lifestyle in Noorvik, which is a small town with a total population of fewer than 700 people. 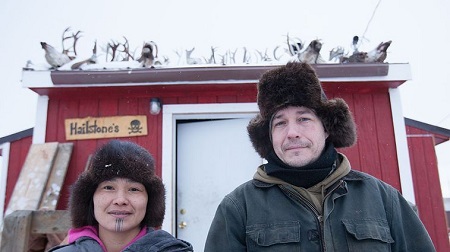 The star of Life Below zero faced some serious legal problem in his life. He was convicted and charged with two counts of making a false statement to the police officer and two counts of perjury. He claimed that a state trooper assaulted his 17 years old daughter, Tingmak physically.

He also claimed that someone had pointed a rifle at his daughter in another incident which involved another family and his eldest son John. He spent 15 months in jail in the Anchorage Correctional Complex in 2017.

At first, he asked for a restraining order for his daughter and later also filed an appeal for his perjury convictions.  His wife along with the children are continuing the show, Life Below Zero, which is running in its ninth season. The family has not disclosed anything about his return on the show.

He then appeared before Magistrate Brooke Alowa and sought a protective order against his neighbor. The case backfired soon and he was charged with legal formalities. The reality star Chip Hailstone is now serving his life in jail, and he's no longer on the show.

Chip Hailstone is a married man. He has been married to Agnes Hailstone Inupiaq native of Alaska, girlfriend, for a long time. The couple has altogether seven children including five daughters and two sons.