Home Article Is Aimee Teegarden dating someone or is already married? Know about her relationship status

Is Aimee Teegarden dating someone or is already married? Know about her relationship status 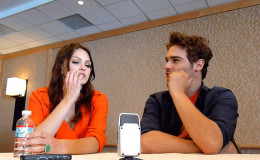 Aimee Richelle Teegarden (born October 10, 1989) is an American actress, model and producer. She starred as Julie Taylor in the NBC drama Friday Night Lights from 2006 to 2011

You sure would know the beautiful and talented actress Aimee Teegarden, if you regularly watch the popular American sci-fi/romantic drama Star-Crossed. With her gleaming beauty and amazing on-screen performances, she has won the hearts of millions of her fans who now want to know every detail of this popular celebrity!!

The pretty star of NBC drama Friday Night Lights portraying her role as Julie Taylor has always remained coy about her private life and affairs. However, as per our sources, rumors have that she is back in the dating game!!. If recent reports are true then, Aimee is secretly seeing a mystery man whose identity is yet to be unraveled.

Let's find out more about her in this digest

Is Aimee Teegarden Dating Someone?

The professional actress with her new ABC shows Notorious premiered in September 2016, has grabbed much attention of the media as she was spotted walking with a mysterious man in Vancouver, Canada.

Sources report that Aimee was shooting the pilot episode for 'The Selection' in Vancouver when paparazzi caught the pair walking out of the store together, grabbing wine and casual breakfast Japadog.

Well, the mystery man is no longer a mystery as his name has been revealed as "Chris Skinner' and he's of British descent. Aimee has also posted a photo of them together on last year's valentine's day expressing their never-ending love for each other.

The duo also reportedly tied the knot in 2013 when they went over to England during Christmas and New Year holidays. They organized a private wedding with only a few close friends and families around.

Well it seems, Aimee wants to keep her personal life away from the media fuss and enjoy her private time with her family and husband. This is the main reason there is no solid evidence over the marriage of Aimee and her alleged boyfriend being her husband.

Not to mention, Skinner also has his Instagram on private mode. But, as of January 2021, Aimee and her man are still going stronger. Likewise, Aimee is also a dog mum to a poodle named Gizmo Teegarden.

The beautiful actress has been linked with various celebrities during the past, however, the one rumor about her dating her co-star Grey Damon swirled up in the media like a wildfire and created many issues.

However, any plausible evidence supporting this rumor is not available and it seems like the pair is just a good friend and nothing more than that.

Different sources reported that the on-screen couple was dating off-screen too. The pair also tweeted about their relationship, however, they did not admit it but instead posted a funny tweet.

@Aimeeteegarden @StarCrossedWiki are we dating?! It would be nice to know these things Teegarden, gah!

Also, here's an interesting video of Aimee and Grey answering questions about their roles in their hit series, 'Star-Crossed' on the CW.

Well, keeping all the rumors aside, we can now undoubtedly say that Aimee is having the most amazing times of her life with a loving and supporting husband by her side.

Similarly, we do hope that the duo shares stories about their wonderful relationship out and open to the public soon.