Is American Basketballer Kevin Love Married? Know About His Girlfriends And Rumors 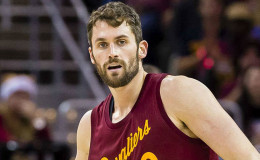 To find true love is to find the greatest treasure in this world. The road to love is hard and long with millions of obstacles and confusions. One gets distracted on the way and also goes through few relationships mistaking it for true love but eventually finds the way to it.

Kevin Love also is one of the lucky ones who has found this rare jewel with his current partner but it also took him long to find her. One could say he found her after some heartbreaks and confusions.

Kevin Love is currently in a relationship with the Sports Illustrated Swimsuit model Kate Bock. The two began dating since 2016. Kate is settled in New York where she works on her modeling projects whereas Love is playing for Cavaliers in Cleveland.

The two managed to make their long-distance relationship work despite being held back by their careers. Bock said that the less distance between the states has made it easier for them to meet more often. Although they are far away they still make out time to be with each other whenever possible.

Kevin’s current girlfriend and probably his future wife was discovered by a modeling company at age 12 at a local swimming pool where she had gone for recreation.

She went to West Vancouver Secondary School and after her graduation went to Paris to further her career. The couple is happy together and shares pictures of them on Instagram.

Happy Birthday @katebock!!! You are truly an amazing person. You bring light into so many peoples lives and deserve all the blessings you receive as a result. Thank you for being so strong, and thank you equally for being so damn funny!! Enjoy your special day. Sending so much love.

She is known to have appeared on the covers of magazines like Maxim and Elle and has modeled for Victoria’s Secret. Kevin Love and Kate Bock’s relationship is going strong for quite some time now even though both have been busy pursuing their careers and the distance between them has made their love rather strong.

Also Read: German athlete Christoph Harting; is he Dating? Any Girlfriend? See his Career and Net Worth

There are no rumors suggesting that their relationship is unhealthy because of this so there is nothing to worry about regarding any separation news. Now it looks like the only natural step would be to walk down the aisle and Kevin turning his girlfriend into his beloved wife.

Well, it looks like it'll have to wait as they seem to be in no rush to take a step further.

Kevin Love Past Relationships and Affairs

Before his current relationship, Kevin was in a relationship with Cody Harrell Horn and Elise Novak at different times. Elise is the first-ever known girlfriend of Kevin as they dated while they were still in college. Elise was UCLA’s cheerleader and they managed to stay in the relationship for six years before parting their ways.

His second known girlfriend was Cody Horn. She is a model and actress just like her mother and she studied at Harvard-Westlake School and graduated in 2006.

She also starred in the movie Flipped as Lynetta Loski in 2010 and as Michelle in horror-thriller film Demonic. She was also in the 2012 Magic Mike.

Don't Miss: Thomas Röhler; is he Dating? Any Girlfriend? Also see his Affairs and Career

There aren't many details regarding the reason for their separations but regardless of his past he is happy with his current relationship and we wish them the best for their future.