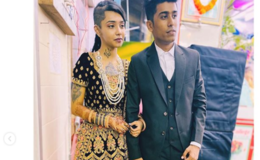 Has the Indian rising internet influencer Wish Rathod found love or are we just deluded? It seems as Miss Rathod happens broke hundreds of her male fans as she is reported to have found her beau.

Currently in her early twenties (as of 2020), Wish Rathod rose to fame through TikTok and her appeal which highly consists of dreadlocks, piercings and an abundantly tattoed body. Only on her Instagram account, Miss Rathos, whose real name is Vishwa Rathod, successfully surpassed over half a million followers which include mostly male fans across the subcontinent.

Now the frequently asked question arises, does this Gujarati beauty have a boyfriend, though?

Wish Rathod Shared A Lovey-Dovey Picture With A Mysterious Man

By the glimpse of Rathod's' Instagram feed, there's one man specifically, Wish constantly share pictures with. That man, however, is Saif Khan, who isn't just someone Rathod constantly collaborates with, but the man who manages Wish too. 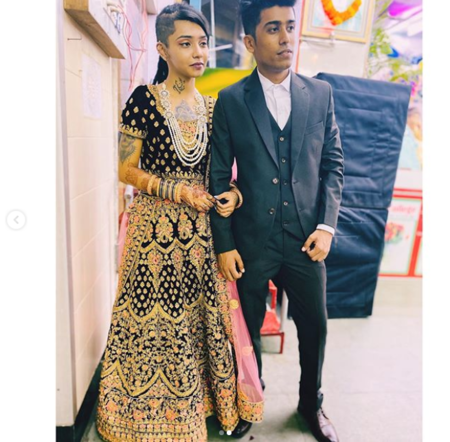 In November 2019, the young yet bold woman took to Instagram to share a wedding picture where the TikTok celebrity can be seen passionately smiling with a blush plastered over her face as her body donned in Indian wear, also happens to be leaning closer to Khan who looks dapper in formal wear.

To make things even suspicious, Rathod captioned the lovey-dovey picture with 'in love', smiling and love emoji. The brunette also remained frank enough to mention the picture was taken at a wedding of a relative.

On the contrary, of course, the fans were quick to jump into the conclusion and pointed out it was actually Rathod's wedding and that the man was indeed Rathod's husband. But, one of the comments tells otherwise. 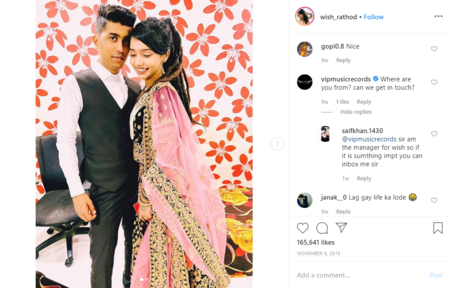 Wish Rathod is managed by Saif Khan, rumored to be her boyfriend. SOURCE: Wish Rathod Instagram

When reached out by a music company called VIP Music Company who particularly and seemingly wanted to get involved with and to know more about Rathod in the comment section, Khan was the one to approach and politely reply clarifying he was her manager and to contact him instead, for business purpose.

So, Is Rathod Dating Saif Khan?

Things look even more complex in consideration that neither Wish nor Saif made clarification over the nature of their relationship amidst all the whirlwind speculations of them being a couple. 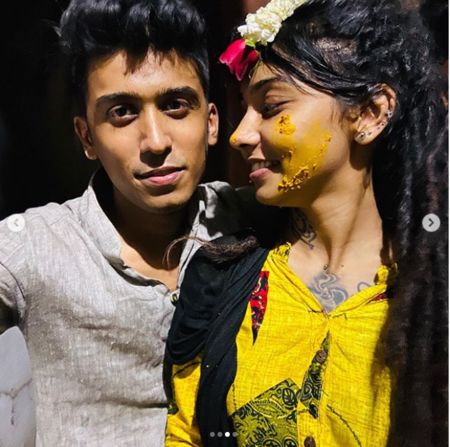 Meanwhile, the wedding picture is not the only thing that started out the rumors as there exist more pictures shared by Wish herself on her Instagram. For instance, in another picture pictured above, basically, a selfie, posted by Rathod, she can be seen passionately looking and admiring Saif whose attention, contrarily, is on the camera. 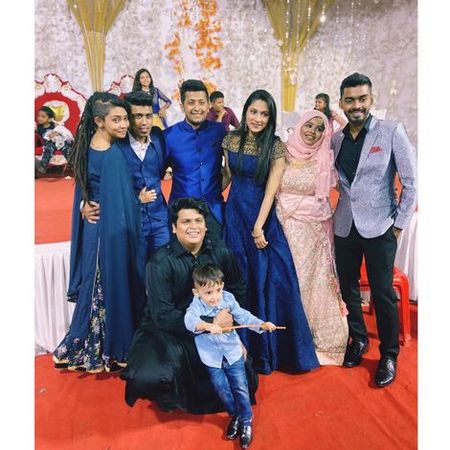 Wish Rathod pictured with her rumored boyfriend and family at a wedding. SOURCE: Wish Rathod Instagram

Another picture as shown above, likewise, showcases a family picture indeed, where Khan has his hands around the back of the fan of the Illuminati symbol who as well has her hands over Saif. The couple is joined by family members for the picture.

But, of course, without the confirmation or any remarks made by Rathod, one is not to believe any dating rumors between the aspiring model and her manager, blindly.

View more interesting Stories and Biographies only on Marriedwiki.com.