Is Jennette Mccurdy Dating right now? Know about her previous Boyfriend and Relation. 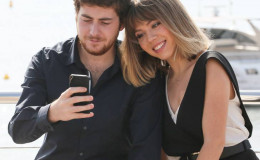 Is Jennette dating someone right now? Is single? Who she dated in past few years? Know about Jennette's relationships.

Jennette Mccurdy is a multi-talented actress and everyone in the show biz knows it. She became popular via her show in Nickelodeon 'iCarly' in the role of Sam.

As we can say is that from her early teenage, Jannette has been a pretty good juggler in terms of making boyfriends and having affairs. She has made some strong controversial statement about her ex-boyfriends without any hesitation. Let's find out more about her not so personal life.

The American blonde bombshell has many other talents except acting such as dancing, skateboarding, singing, playing basketball etc.

However, her acting ability gave her the popularity. We must say she was amazing in 'iCarly'; we all loved her character, Sam.

Reportedly Jennette is single right now, not is dating anyone. But there are rumors flying around that she is seeing someone but that someone has not yet been revealed.

Maybe she wants to keep it a secret. Let’s see for how long it will take her to disclose the name. Anyways moving ahead, she has dated some famous personalities that have left everyone jaw-droppingly surprised.

Let us see who those guys were?

CHRISTMAS IS IN FIVE DAYS. tell me about your favorite Christmas memory!

Her past relationships and affairs

She has dated a few numbers of people over the past few years. From the year 2004 to 2008 Jennette was in a relationship with Graham Patrick Martin who is an American actor and songwriter.

Similarly, she was also linked with Max Ehrich in 2011, but she cleared the air by saying 'they were just friends.'

Likewise, she dated Paul Glaser who was her 'iCarly' co-star. Soon after Paul she went to the basketball court and picked Andre Drummond. Her one of the popular romances was with the basketball hottie but that relationship also did not work out for her.

In 2014 she secretly started dating her Netflix show ‘Between’s co star Jesse Carere. But she revealed the news after a year of being involved with him.

Out of her many exes she has mocked a few of them because of no apparent reasons. The 24-year-old has been mocking her ex-boyfriend Andre in the public.

She said some shitty stuff to Drummond after breaking up. Apparently, she dumped him because he was a bad kisser.

She made fun of him by going off the record when asked why the two broke up. Her exact words were “the kiss was not so great, no spark and the mouth….the shapes weren’t right”.

Pretty ungrateful I say. What do you guys think?