Home Article Is reporter Leland Vittert dating someone? Does he have a girlfriend?

Is reporter Leland Vittert dating someone? Does he have a girlfriend? 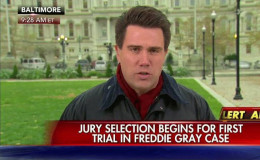 He is smart, charming, handsome, and what not. He is very serious about his work and he has even put his life in jeopardy while reporting. He is Leland Vittert, the most sought out bachelor in TV.

A handsome reporter plus the freakishly good looks and best hair in the industry. He is none other than Leland Vittert. He is currently single and is not dating anyone. Although there was a rumor of him dating an executive but the news has not been confirmed.

Leland is currently working as the correspondent for the Fox News Channel based in the Washington, D.C. however, today let us discuss his personal life rather than professional.

Did Leland ever date someone or has any relationship ?

Although according to him he is single, but as per the sources, there was once a rumor circulating Leland that he was dating an executive called Sara Scott.

He has several pictures of himself with many women in his social media and it seems a majority of them are his coworkers.

In 2009, while being interviewed by BILL HUSTED of Denver Post , Bill asked Leland if he has any date today. Leland answered yes and when Bill asked where was Leland taking his date, he refused to answer.

This shows that Leland is not exactly the loner type and he does go on a date often but he refuses to disclose his personal life.

Likewise, when asked if he is single or lives alone, Leland told him that he lives alone in his house, without any cats or dogs.

Similarly, when he was asked what would be the perfect happiness for him, Leland replied that if he can make a Victoria's Secret Model to fall in love with him and to be on a beach with her with a margarita.

He surely seems a very romantic guy. Doesn't He?

The most eligible bachelor on Television

Leland is currently the most sought after bachelor in Television. He has appeared in "50 Sexiest in TV News 2015". His well-built body and his impeccable hairstyle have caught eyes of many celebrities around the globe.

But Leland seems to have sidelined himself from all these relationship thing and currently is focusing on making his career.

It takes a village to be ready for 2 hrs with @JennaLeeUSA #nofilter see u on @HappeningNow @FoxNews pic.twitter.com/5CeZ7TbYqd

Well, as of now he is single and does not have any girlfriend but fans would love to see him with someone.