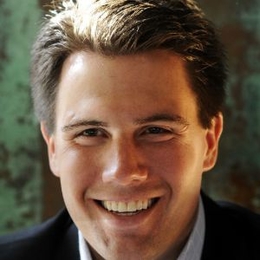 Widely known as the co-host of the show; America's News Headquarters, Leland Vittert is a famous American television personality. Leland joined the Fox News Channel based in Washington D.C., in 2010 and since then he has made a remarkable contribution in this field.

Leland Vittert is Currently Not in Any Relationship; A Big Time Dog Lover

For those ladies who are wondering whether this 32-years old television personality is single or taken, we are glad to announce that he is currently enjoying his singlehood. 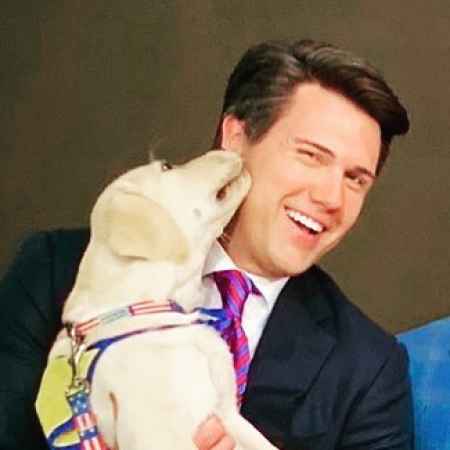 The reporter and host remain at ease when it comes to his personal life which can be seen by his easy-going social life. Given his affinity towards work, we can say for sure, the man will definitely settle down with someone who is in the same field as him. But at the moment, that seems like a far fetched thing.

Apart from that, many of you might not know that Leland is a big-time dog lover. He himself has a pet Puppy named Marvick in his office.

In addition, Leland once raised funds to help all the street dogs or those who were left behind by their owners. Through his Instagram, he announced that Leland and his crew members have collected almost $15,000 on September 19, 2018, to help such dogs.

Leland is Good Buddy With Other Famous Correspondents

Leland is quite close to some of his colleagues including, correspondent Gillian Turner, and Kristin Fisher and often shares lovely pictures with them on his Instagram. 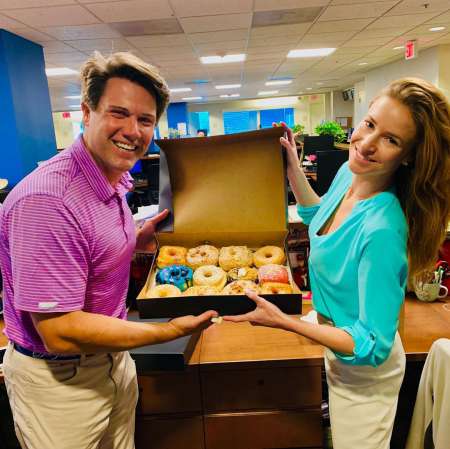 Besides, he is also active on Instagram account with more than four thousand followers. He often flaunts his as well as his college's pictures on his Instagram.

Leland's Complication During Birth; Umbilical Cord Stuck In His Neck

Leland had to go through complications while he was in his mother's womb. When the doctors examined, they found that the umbilical cord was stuck in his neck, so after some serious discussion, they came to the conclusion that they have to do a C-section surgery in order to remove the umbilical cord.

As a result, the doctors had to deliver the child artificially in order to save the mother and baby. Though he survived a major scare and born as a healthy baby, he was left unable to speak. This incident had seriously affected his parents. After much medical counseling, doctors consoled Leland's parents that he would recover slowly. After he turned three-years-old, he began to utter words and now he is in such a profession where speaking is quite in demand.

This really surprised the doctors because according to them there was a minimum chance of survival for both of them. The doctors, then, called him lucky and since then he gained a pet name Lucky.

Leland was nominated for Emmy award in 2006 when he covered a case in which police officer Bishop was accused of raping and killing a girl. Later, it was revealed the cop was not guilty and he gained his position back.

Moreover, he also covered the news where the United States government wasted $25 million to construct a bridge to the nowhere land. As a result, the taxpayer's money was wasted in vain. This coverage also added him to the nomination list for Emmy award in the same year.

Nevertheless, his good deeds don't end here. On January 4, 2007, on the show "friend zone", Leland along with his co-host, Tucker Carlson, talked about an incident in Israel. He said during his time in the war zone, he met a woman who was a failed suicide bomber.

After that, when Leland interviewed her, he came to know that some group of Israel terrorist brainwashed her and convinced her that if she gets away with this evil deed, blessings from heaven will be bestowed upon her.

Luckily, when she pulled the trigger, the bomb didn't go off and immediately after that, she was arrested by the police. The woman was then sent to the prison where later she changed her path and became a speaker against hate crimes. She also said that she wanted to become a Journalist so she could raise awareness regarding this issue.

Below we have the clip of the show in which Leland talked about the woman!!

Leland Vittert has a Descent Earnings

Leland Vittert has been engaged in journalism for the past 9 years. During such a long journey, he has not only gained huge name and fame but also has successfully established him as one of the highest-paid correspondents of Fox News Channel.

Do visit Married Wiki for latest Biography and Gossips on your favorite celebrity!!!