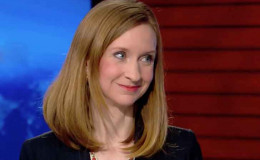 Lisa Desjardins is an inspiration to women all around the world who want to pursue their career as a journalist. She has dedicated almost 20 years of her life in journalism. She currently works as a correspondent at the PBS NewsHour who previously worked for the CNN Radio and Associated Press.

Like many other famous TV personalities, we know so far, Lisa Desjardins is quite protective about her personal life. She never talks about her private affairs in the media, still, we are aware of the fact that she's a happily married woman.

She tied the knot to her husband Jason Desjardins for 11 years now and we are so sure that the two are still going on strong!

You May Like; Anchor Diane Macedo is happily Married to Thomas Morgan: Know about their Family, children, and Career

Though Desjardins prefers to keep everything behind the bar she took Twitter to celebrate her 10th wedding anniversary in October 2017 and wrote:

"SO LUCKY – I married this amazing man ten years ago today. Maybe not Twitter talk – but feeling a bit giddy in love tonight."

They simply look like a newly married couple, aren't they?

SO LUCKY - I married this amazing man ten years ago today. Maybe not Twitter talk - but feeling a bit giddy in love tonight. pic.twitter.com/yOJCUSjguM

The pair welcomed their son Maximo Maurice in March 2016. She shared the blessed news with her fans via Twitter post.

INTRODUCING: Max Desjardins, our brand new son. We are over the moon. He's v happy, except this, re: 2016 elex. pic.twitter.com/lq1pOzBIEW

It was the same day she uploaded another image of her lovely son and husband announcing that  Maximo is named after their beloved grandfather.

Though the former CNN correspondent prefers to maintain her family life in privacy, we are so happy that she manages to share some of the amazing moments of her life.

Desjardins started her career working at the local TV station WBTW in Myrtle Beach, South Carolina. However, for some reasons, she was fired from the station between 1998 and 1999.

Before joining Columbia NBC-affiliate WIS as a political reporter, she worked as a freelance reporter for The Sun News. She reported 2004 presidential election, Medicaid, hurricanes and the Irag War being a newswoman at the Washington, D.C. bureau of the Associated Press.

In 2005, she joined CNN and worked in the network for nine years. Apart from being CNN Radio's Congress correspondent, she also worked for CNN.com and CNN's news channel. She was fired from the CNN including many other employees in 2014.

In 2008, she received a Peabody Award for covering the 2008 presidential primaries. Furthermore, she grabbed a Sigma Delta Chi Award reporting the 2010 Haiti earthquake.

Recommend; WCVB-TV Weather Forecaster Cindy Fitzgibbon is happily Married and is blessed with two Children: Know about her Husband and Family life

She wrote a book entitled Zombie Economics: A Guide to Personal Finance with Rick Emerson. She started working at the PBS NewsHour in October 2014 as a politics reporter.