Home Article Was Isamu Akasaki Married at the time of his Death? Who was his Wife?

Was Isamu Akasaki Married at the time of his Death? Who was his Wife? 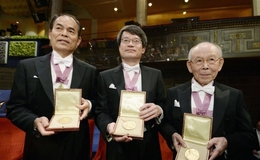 Some people depart from this world prematurely while others lie a wonderful life before bidding a farewell forever. It's surely the latter for Isamu Akasaki, who left a lasting impression through his extraordinary career before resting in eternal sleep.

Japan's Scientist, Isamu Akasaki, who received Nobel Prize for his revolutionary LED Lamps, had a beautiful life with his wife until he died in 2021. Know in detail about his family life, including his children.

A Japanese scientist died at the age of 92, leaving behind his family. Dr. Akasaki took his last breath on April 1, 2021, at a hospital in Nagoya, Japan.

According to the information shared by Meijo University, it was reported that Akasaki passed away due to pneumonia.

Isamu was 85 when the Nobel prize was announced, described himself as a "slowpoke" as per "Asahi Shimbun," the Japanese Newspaper. The Scientist won the 2014 prize alongside his fellow honorees, Hiroshi Amona and Shuji Nakamura.

To be precise, the group of three Japanese-born researchers developed the blue-emitting diode, which Nobel Jury described as a "revolutionary" invention. Besides, Dr. Akasaki is also the recipient of the "2009 Kyoto Prize" and " 2021, Queen Elizabeth Prize for Engineering".

Was Isamu Akasaki Married at the time of his death?

Accounting his personal life, The Japanese Nobel laureate Isamu Akasaki was a blissfully married man. Although very little information about his dating years is available, Isamu never involved himself in any situation that could ruin his career. 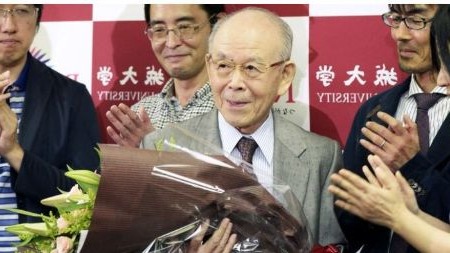 Isamu Akasaki celebrated after the announcement of his Nobel Prize, 2014. SOURCE: Kyodo News

Well, Akasaki didn't disclose all the information about his married life, including his children. Perhaps in his early years, the couple fell in love and decided to take their relationship to the next level.

It's unsure exactly when they began dating, but according to him, his wife has been very supportive and loving all the time. What's more, she was with him when he was awarded the Nobel prize in Physics.

Here's the message of Isamu Akasaki to never be afraid of making mistakes.

Extremely secretive personality, professor Akasaki never openly talked about his private life. He was known to be a sensitive and highly intelligent man.

After obtaining a BS from Kyoto University in 1952, Isamu Akasaki worked for Kobe Kogyo Corp until 1959. Then, Isamu went to Nagoya University and held several teaching positions while receiving a doctorate in engineering in 1964.

Subsequently, Akasaki served as the head of a basic research laboratory at the Matsushita Research Institute Tokyo until returning to Nagoya University and earning the title of a distinguished professor in 2004.

aftStay updated with Married Wiki for more news and articles of celebrities.