Home Article Who Is James Corden Married to? All Details Here

Who Is James Corden Married to? All Details Here 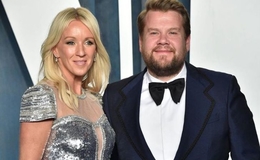 James Corden and Julia Carey have been married for over a decade: The Pair are doting parents of three! All Details Here

Otherwise known and loved as the host of the eponymous show, James Corden is currently facing massive criticism after a restaurant owner dubbed the comedian as the "worst customer ever," and even put a ban on him. Corden has since come up with a public apology, which many called backhanded. Amidst the ongoing row, Corden's personal life and career have been put in the limelight once again.

James Kimberley Corden, 44, is an English comedian, actor, television host, and singer. Corden became a household face after he succeeded Craig Ferguson as the host of the popular The Late Late Show. But before acquiring international stardom with the talk show, Corden was already a sought name in his native with credits in the BBC sitcom Gavin & Stacey, Fat Friends, and Cruise of the God.

Corden and his wife Julia Carey have been married for over a decade, yet very little is known about the happy couple and their beautiful family of five. Although the Tonny-winning actor does prefer his personal life out of the media's hair, Corden occasionally gives fans access to his life away from the television. The Late Late Show host and Carey met in 2009, and as per a few anecdotes shared by Corden, it was love at first sight. 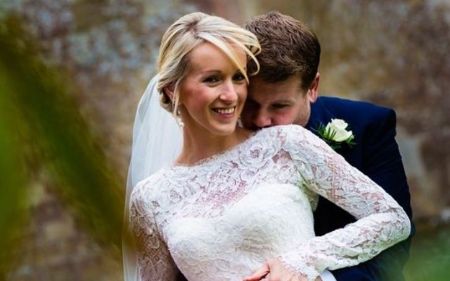 Corden recalls actor Dominic Cooper invited him to a Save the Children event, where Julia happened to be working. The Gavin & Stacey star didn't think twice and took his shot at the opportunity.  I said, 'Hi, Jules, you might be the most beautiful woman in the world," James recalls saying to his now-wife Caret, who replied, "well, thank you very much, that sounds like something you say a lot."

"And I said, 'I've never said it before in my life.' That was it, that was it. It was an absolute miracle, and so was she," James shares. After almost a year-long dating bliss, Corden and Carey engaged in late 2010. Corden and Carey had to postpone their wedding because of the unexpected arrival of their son, Max, born in March 2011.  he smitten pair walked down the aisle on September 15, 2012. 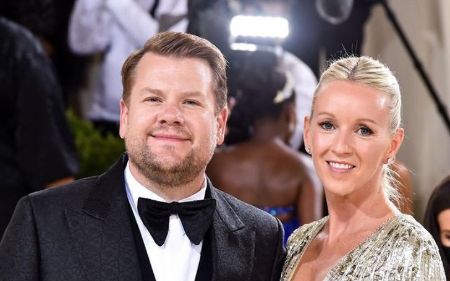 The pair have been married for a decade. SOURCE: Instagram

Since their low-profile wedding a decade ago, the duo has welcomed two more kids, daughter Carey in October 2014 and daughter Charlotte in December 2017. A though James loves his kids, the comedian doesn't mind sharing the struggles of parenthood. " t's just a nightmare," Corden said about raising three children. "  understand, now, why my parents just used to not do anything with us on the weekend, 'cause it's too much hassle," the comedian adds.

Carey is happy being referred to as Corden's wife. A though the mother of three has settled to look after her family most of the time, Carey might still be taking up a gig or two in the industry. B fore she came across Corden via another celebrity friend, Carey herself had a budding career as an actress and producer. H r credits include Wings, Enemy at the Door, and A Bunch of Fives. 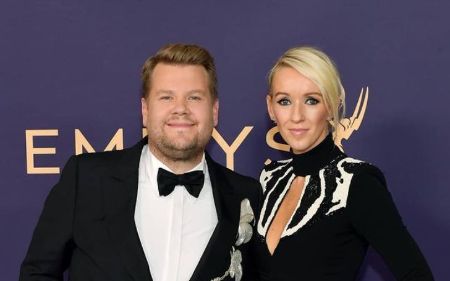 Carey might not have a decorative career like her Tony-winning husband, but she sure is the woman behind Corden's success. "S riously, I would not be holding this if it wasn't for her. Sh  made me say us instead of I and we instead of me, and I love her. Th nk you very much," the Late Late Show host said in Tony's acceptance speech. As de from being a doting wife to Corden, Julia is also a protective mother of three.

Carey and Corden became parents before they took their vows to become lifelong spouses. The couple shares Max, 11, Carey, 8, and Charlotte, 4. A very private person on regular days, Carey shines through her celebrity moments when accompanying her husband on red carpets and other events. The former actress's celebrity status was reckoned when she attended Prince Harry and Meghan Markle's wedding in 2018. 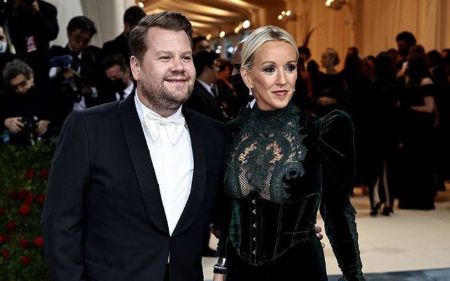 The family of five live in their swanky mansion in Los Angeles, but as per Corden's statement last year, the comedian might relocate his family to his native. "Th s will be my last year hosting the show," Corden said while announcing his departure from the Late Late show after eight years. "I' e really been thinking about it for a long time, thinking whether there might be one more adventure," says Corden. Ins ders revealed the Tony winner misses his family back home and is contemplating a move back to the UK.