Home Article Joseph Gatto Is Living Happily With His Wife Bessy Gatto; Know In Detail About His Married Life and Children

Joseph Gatto Is Living Happily With His Wife Bessy Gatto; Know In Detail About His Married Life and Children 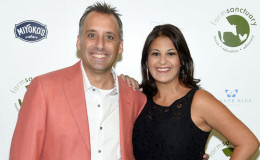 Joseph Gatto is a star is best known for his hit show, Impractical Jokers and is married to his long-term girlfriend, now wife Bessy Gato and has two kids with her. There are no rumors and controversies regarding him.

One has to be really lucky to have both true love and a prominent career since both seem to contradict each other as one causes issues while trying to achieve the other.

It requires a great set of skills or a huge amount of luck to have both and although we don't know if its luck or skill, Joseph Gatto, one of the stars of the hit show, Impractical Jokers, definitely has successfully found both love and a good position in his career. One could even say that his love has rather helped him in his achievements.

What is The Tenderloins star Joseph Gatto Up To Now?

The Tenderloins' star Joseph Gatto and his girlfriend turned to a spouse, Bessy Gatto ae united as a life partner for six years now. The cupid turned their growing lovey-dovey relationship into holy matrimony followed by dating several years.

Regardless of being together for decades, neither of the pair engaged in extramarital affairs, divorce or fake controversies. Gatto is a proud father and a loving husband of his partner, he prefers to spend time with his family in the meantime.

As you can see, Joe Gatto shared his cute family photo via Instagram on December 23, 2019 writing "Loving some family time after a long year of work and travel". In the picture, one can see him making Christmas homes for his kids. Similarly, on January 3, 2020, Gatto's went for vacation on their three hours JetBlue flight.

Joe Gatto is a TV star who is in a married relationship with his long-term girlfriend, now wife, Bessy Gatto. Joe tied the knot with Bessy on 2 September 2013, officiated by his very own friend and colleague, Sal Vulcano. The couple has been blessed with two children named Milana Francine Gatto, and Remington Joseph Gatt.

Bessy is very supportive of her husband and the pair have been with each other conquering the milestones of marriage and they don't seem to be stopping anytime sooner. The pair's love for each other is clear to everyone and it won't be wrong to claim that Joe is really lucky to have found a wife like Bessy.

Currently, Bessy is like his social media manager and she uses all her social media platforms to drum up support for her husband. She actively promotes Joe's endeavors and often posts about them in her Instagram account which has a following of more than 50,000.

Say hello to the new Gatto dog Zeppole!! Already in love with this senior love bug. Thank you @animalleague for our new baby. #adoptdontshop #seniordogsrule #oneeyedog

Currently, Gatto is spending quality time with his children and wife and has managed to keep away from any rumors and speculations. There is no news indicating any divorce or separation between the couple.

Joseph Gatto is living happily with his beloved spouse and their children and is content with his professional and personal life. The lovebird's first child, a girl, Milana Francine Gatto was born on May 7, 2015, two years after they got married. Although they both love her equally, Joe seems to share a special bond with his daughter who he calls ‘daddy’s girl’.

Joe Gatto with wife and daughter

Their happiness doubled when on February 9, 2017, he took to Instagram to announce that they are expecting a new member in the Gatto family and it is gonna be a son.

He expressed his joy and also warned the girls that the mischiefs were gonna get doubled with the addition of a boy.

Finally, Remington Joseph Gatto was born on July 31, 2017, and Joe couldn’t withhold his happiness as he announced the news to his fans and the world via Instagram.

Here's my son Remington Joseph Gatto. Or as we call him, Remo. Thanks for all your thoughts. Mom & baby are doing well. Hold on tight buddy, it's gonna be a hell of a ride.

The whole Gatto family lives in California and they seem to have all the happiness that anyone can wish for. As one who has sympathy and a soft spot for people with special needs, he is also a part of the ‘Daniels Music Organization’ that provides a comfortable social and educational environment to mentally and physically challenged members.

Aside from that, he also supports animal groups and likes rescuing dogs. He is very big on supporting anti-bullying organizations and is known for working with Heros Roundtable. The Family of four seems content as indicated by his post where he asserted that a family of four is good.

With a happy marriage, supportive wife and two beautiful kids, his life is full of love and he spreads the love through his show and the charities. One can only wish that happiness lasts forever and it only increases in the future.