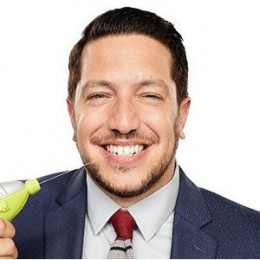 Sal Vulcano was born on November 6, 1976, in  Staten Island, New York City, USA. He has a sibling named Jenna Vulcano.

Vulcano started his career in the 1990s as an improvisational comedian, actor, producer, and scriptwriter. He began hosting a podcast, ‘The Tenderloins Podcast’ in April 2012.

Sal Vulcano is possibly single at the moment and his love life is a matter of secret in media. He prefers low key personal life and does not indulge in sharing it with media.

He declared himself as a gay while appearing on the Daytime Talk show hosted by Sally Jessy in order to encourage James Murray to reveal his sexual orientation as a gay.

Yes! James Murray came out of the closet!

Later Vulcano admitted that he's, in fact, straight and he claimed himself a gay just to encourage his fellow star.

Sal Vulcano's net worth is estimated to be somewhere around $400k.