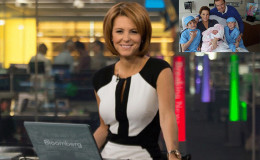 One of the popular American journalists Stephanie Ruhle is ruling over the industry through her amazing anchoring and presentation skills.

After working for several years in the banking sector she decided to join the journalism in 2011 and even in this short span of her career she has managed to win the heart of millions through her hard work.

Similarly, she is also a happily married woman. She married Andy Hubbard in the early phase of her career and they have three children together.

Stephanie met her future husband Andy at one of her training programs. Two of them eventually started dating and later on got married.

Andy who is currently working as a portfolio manager at USB O’Connor seems to be a very loving and caring partner and his wife often mentioned him as the best husband and they definitely come under one of the hottest power couples.

A good day with this crew #halloweencountdown2016

There has never been any rumor of them getting a divorce and having any sorts of problems in their marital relationship.

Even though the couple does not share anything about their personal life by just looking at them we can surely assume that they are very happy together.

Goodnight Great America...i can't speak for all of it...but In some cases, I love you just the way you are #brothershubbard #happyhalloween

Stephanie Ruhle: A loving wife and a caring mother

There is no doubt that Stephanie is a loving and caring partner which is why she has a wonderful and blissful married life.

Apart from just being a wife, she is also a mother of three children; Reese, Harrison, and Drew. Even in her demanding and hectic schedule she never forgets to spend time with her children.

Dangling for donuts with @hdogpix... thanks for the #halloweenpartygames @todayshow! For inspiration and awesomeness #todayhalloween does it best #happyhalloween

It is always difficult for a working woman to manage time for her young ones but Stephanie has been able to manage it somehow.

In 2012, she was also featured on the cover of ‘Working Mother’ magazine along with Fit Pregnancy in 2013.

This week, we've been surprised, overwhelmed and wondering about a whole new world-- lets just remember what we can do everyday- be grateful - be kind and give everything we can to make the world a better place for our kids- @msnbc @todayshow

We must say she has a very lovely family and we wish her to be more happy and successful in her upcoming future.

Please...I've been called a face-eating badger. My sons are still laughing about it https://t.co/tDS9hpEMJy

Before joining journalism Stephanie was working in the banking sector for about fourteen years. However, she was not happy with her job and decided to switch to journalism.

In the year 2011, she joined Bloomberg Television and co-hosted ‘Inside Track’ with Erik Schatzker.

Similarly, she also hosted and produced a documentary ‘Haiti: Open For Business’ which was based on the emerging business market five years after the devastating earthquake which hit the nation in 2010.

Currently, she is no longer associated with Bloomberg. She now works as an anchor for MSNBC Live, NBC News correspondent and also as Weekend Today anchor.

She is a very dedicated and talented person and has become an inspiration for millions of people out there.