Home Article Jun Ji-hyun and Choi Joon-hyuk got married in 2012. Know about their family and children

Jun Ji-hyun and Choi Joon-hyuk got married in 2012. Know about their family and children 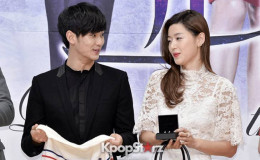 Jun Ji-Hyun also known as Gianna Jun is a South Korean actress famous for her role in the South Korean romantic comedy 'My Sassy Girl', which was one of the highest-grossing movies of all time in South Korea.

Gianna is famous worldwide for her overloaded cuteness which made her one of the most followed girls in the world. She is currently married to South Korean businessman Choi Joon-Hyuk. The couple has also been blessed with a child.

Gianna and Choi started dating in 2010. It was said that the couple started developing feelings for each other when Gianna took care of Choi when he was hospitalized.

The couple was friends with each other since their childhood and they turned their friendship into a relationship in 2011.

Many of you must be wondering who is Choi Joon-Hyuk and how did he marry our beloved star. Well, we have found out about Choi for you.

Choi is the grandson of very famous hanbok designer of South Korea. He is an investment banker in 'The Bank of America' and his father is a very wealthy man as he has the majority share in Alpha Asset Management.

After dating for about two years the couple got married in April 2012.

Another Top Talent: South-Korean Actors Park Shin-hye And Choi Tae Joon Are Officially Dating-Know The Love Story Of The Couple

On 10 February 2016, Gianna gave birth to the couple's first child. The boy was born in one of the hospitals in Seoul.

The duo was very happy upon welcoming their new family member in the world.

The couple seems to be the perfect match for one another as there have never been any rumors of them getting a divorce or having any sorts of problem in their marriage.

She gave birth to her second child; a healthy baby boy on 26 January 2018 as stated by her agency.

We wish them to remain as it is for the rest of their life and always be happy and successful.