Justin Timberlake Married Jessica Biel in 2012. Know about his Family and Children. 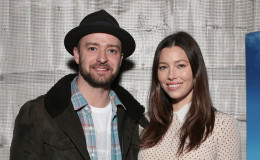 One of the renowned faces of American Music industry, most popularly known for his hit R&B songs like Cry Me a River, Sexy Back and What Goes Around..Comes Around, Justin Timberlake has been a loving husband to his beautiful wife Jessica Biel for the past four years and we can expect more years of their togetherness.

The two-times Grammy Award winner singer turned actor, Justin married the gorgeous award-winning actress Jessica Biel in 2012 and now are living happily together. Let's find out more about the adorable couple in this digest.

Justin and Jessica are truly an inspiring couple as they did not really give up on each other despite their several on/offs relationship which was followed by a breakup too.

Before exchanging vows the duo was dating each other for five years and was madly in love. Finally, they decided to take a further step ahead in their relationship and got married.

Sources reported that the singer-turned-actor proposed the actress when they were on a romantic trip to the mountains of Jackson, Wyoming, skiing together at the Big Sky Resort in Montana in December 2011.

They got engaged during that time and tied the knot a year later in October organizing a grand ceremony in Southern Italy.

The wedding was held at Borgo Egnazia Resort in Puglia, Italy where they exchanged rings and vowed to be together forever. Sounds like a dream come true, doesn't it?

On an interview in The Ellen DeGeneres Show, Jessical expressed her exhilirating experience of being a newly wed and said;

“It’s weird because it feels like almost nothing has changed, yet something that you can’t really describe, or something that isn’t tangible has changed. The weirdest and kind of most wonderful thing is that word. That’s my husband.”

“It just feels incredible. It feels like you have this partner who is going to be with you and also change light bulbs and do dishes with you.”

Justin was spotted making a long conversation at Golden Globes after party with Jessica.

After the first encounter, their chemistry resulted a burning romance that started in 2007. Soon, they were spotted together taking trip overseas and getting cozy in Manchester at a football match.

Later in 2008, the pair announced that they were officially dating each other during the UK edition of GQ. The pair has decided to part ways and remained good friends in March of 2011.

Despite having several relationship problems, they found ways to make things work and chose to stay together with enduring love and respect for each other.

I played 'sardine' and got the 50 bonus points! Guess who is no longer undefeated... #scrabblebrag

The couple is still going strong together in their marriage and has also started a perfect family together with an adorable son.

The singer-songwriter and actor with his wife, actress Jessica Biel, welcomed their first child, after almost three years of marriage.

They have a son named Silas Randall Timberlake. According to sources, Silas was born on April 8, 2015. The duo completely adores their one year boy and shares a lot of picture of them in their Instagram account.

Happy Mother's Day to you, Mom. I only, just now, understand what you did for me. And to all moms everywhere, I'm having a champagne in your honor. And when I say champagne I mean seltzer water cause mama's gotta do carpool in the am. #momlife

On an interview with MailOnline, Jessica Biel shared all about how her son Silas likes to groove to father's music.

Well, we really hope that this adorable couple remains together happily for the rest of their lives and do best in their forthcomings together as a happy family.