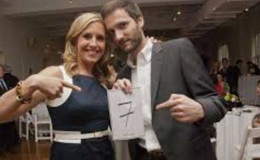 Sinisa Babcic is the husband of renowned reporter Poppy Harlow. Both Poppy and Sinisa are very happy and in love with each other. The couple got married in 2012 and they are living blissfully ever since.

Harlow is a renowned journalist who is known for her reporting skills and her dedication towards her work. She was born in Minneapolis, Minnesota, the United States to attorney James Lee Harlow.

Sinisa and Poppy tied the knot on September 1, 2012. The couple was already dating at that time and they thought that they should now take their relationship further and be together. Poppy who was thirty at the time of her marriage was a famous news reporter. She has been working for CNN for the last four years. Her marriage with Sinisa is the best that one could possibly imagine for. They go to sports events together, they go to parties together, on their weekends they hang out with their family and friends.

Her dedication to work can be seen as she came to the office while she was pregnant. Though her co-workers were always telling her to give it a rest, she refused and still came to work.

On December 28, 2015, she passed out during a live show on which she was reporting about ISIS militants. She came to her senses after few minutes and until the time she wasn't available, a graphic was used instead of her.

Thank you all for your concern and messages! I am ok! Passed out briefly and am with the doctor now. So thankful to our amazing CNN team.

But later she tweeted that she and her unborn baby are doing fine and there was nothing to worry about. She also tweeted about her and her daughter's condition after checking up with doctors.

Update from the hospital -- our little girl due this spring is doing just fine. Was a scare but we are both ok. Thank you all so much!

Well, those of you who do not know Sinisa is a senior manager at Ernst and Young  LLP. He has previously worked for Temenos, Thomson Reuters, and RBC Wealth Management before joining Ernst and Young in 2013.

He also has ten years of experience and has specialized in Product and Technology strategy, private client banks, and retail brokerage.

He also has a degree in Business Finance, which he completed from The University of Illinois.

Children Between Sinisa and Poppy

Sinisa and Poppy have been blessed with one daughter.

They named her Sienna and the couple was very happy about it. She was born on April 11, 2016.

Meet our little girl Sienna! 8.5 pounds and a bundle of joy! She was born right on her due date making deadline like a true journalist;) We're over the moon with excitement and love

She posted her picture with her husband and newborn Sienna.

"Luca is an incredible blessing for our family. He joins big sister Sienna in bringing us unparalleled joy. So far he loves to sleep … something Mom and Dad hope continues!"

Apparently the name Luca means 'bringer of light' in Serbian, which is an attempt at honoring Babcic's roots.

In 2013, while reporting for the trial of two high school football players who were caught for raping a 16-year-old girl, Poppy apparently showed sympathy for the two culprits after hearing the judge's decision, as she said that "It was incredibly difficult, even for an outsider like me, to watch what happened."

Well, she apologized for that later on.