Home Article MSNBC Correspondent Kasie Hunt, know about her Affairs and Boyfriends. Is she Dating someone or already Married?

MSNBC Correspondent Kasie Hunt, know about her Affairs and Boyfriends. Is she Dating someone or already Married? 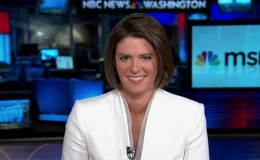 Kasie Hunt is MSNBC's Political Correspondent. She appears regularly on "Morning Joe" (6 to 9 a.m. on MSNBC) and on other programs on the channel. She also writes for msnbc.com.

MSNBC correspondent, Kasie Hunt, who appears regularly on "Morning Joe" that airs every morning on MSNBC is one of the famous correspondents. She is famous for her excellent presentation skills and outstanding personality.

The talented news reporter has sure drawn upon a lot of public attention and now everyone wants to know all the details about her. So, without wasting any time, let's take a peek into her personal life and relationship history.

Is Kasie Hunt Married or Single?

Although Kasie is a famous political correspondent and holds an honorable position in her field, very little has been known about this pretty-witty reporter.

She has managed to keep her love life very private and information about her dating history is still a mystery. However, we still have something for you about her personal life that is not worth missing.

In March 2016, when Kasie was interviewed by "The Hill", the mug lover, told about her mugs, in which one of them has prints of love rectangle including her boyfriend, herself, her coffee and the 50 mugs. She told the sources:

“In 2016, it’s kind of grown probably a little faster than my cabinets can accommodate. Each one of them is kind of specific to a place in time, or a thing, or a story that I did, or a place where I was.”

“Hopefully, my boyfriend will put up with them living in the cabinets,” she laughs. “I’ll pull them down off the shelf and be like, ‘Oh yeah, that time I was in South Carolina. I’m glad that election cycle’s over!’”

Her statement 'Hopefully my boyfriend will put up..." clearly indicated that she is already in a relationship with someone, but WHO? She is definitely not married but seems like she got engaged.

According to the sources, Kasie is no longer an eligible bachelorette, and it might crush some of her fan's hearts, but she got engaged to her fiancé Matt Rivera in August 2016.

Matt and Kasie started dating a long time ago and the man has finally put a ring on her finger.

Kasie got engaged with fiancee Matt in Big Sur in front of the Santa Lucia Mountains in August 2016.

Matt Rivera, according to his LinkedIn profile, works as a producer for NBC and serves as the Senior Digital Producer fo NBC Meet the Press. Likewise, Kasie had also joined NBC in 2012 from Associated Press. From this, it can be guessed how they met and fell in love.

Likewise, Kasie has also joined NBC in 2012 from Associated Press. From this, it can be guessed how they met and fell in love.

When the duo got engaged, no one knew, except their family and friends. NBC's Morning Joe's co-host Mika Brzezinski broke the news and congratulated the couple first.

Kasie then revealed that Matt proposed her in the most romantic way by taking her to a beautiful place Jade Clove, getting down on one knee and asking for her to spend the rest of her life with her.

Jade Clove Trails where the couple got engaged

Despite being engaged, we have not heard any wedding bells of this couple regardless of no reasons. The couple has not announced anything about them.

We are constantly hoping that the duo will soon settle down and get married and start a beautiful family together.