Home Article Last Man Standing Danielle Bisutti Was Married; Who is The Husband?

Last Man Standing Danielle Bisutti Was Married; Who is The Husband? 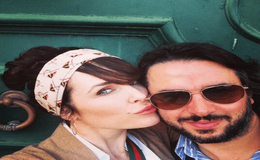 For a lot of fans of actress Danielle Bisutti, she is known for never married, but that's not true at all. Say what?

It is indeed true, Danielle Bisutti, better known for her appearance in several films and tv shows including Last Man Standing where she played the role of Michelle previously shared a married life that unfortunately couldn't survive.

Who Was Danielle Bisutti Married To?

The gorgeous dark-haired beauty i.e. Danielle Bisutti was married to former husband Lorenzo Cascino, a Los Angeles based businessman of Italian origin. Although their love story couldn't succeed, there's no denying over the fact at how much Miss Bisutti loved him as Danielle would publicly honor Lorenzo on the occasions of their anniversary and Valentine on social media.

Well, romantically enough, Bisutti and Mr. Cascino first met in Venice, the city of romance and love. It was actually in 2014 the two came across each other's life and instantly hooked up. And eight months later in December, Cascino popped the question.

Needless to say, the two fell head over heels in love than within a year, they united as a husband and wife. And, whilst it lasted, the California-born and raised wouldn't mind sharing the love she had for her man on social media.

Unfortunately, that love failed to face it's marriage challenges as in September 2016, Bisutti and Cascino parted ways and divorced. Additionally, their divorce filed in Los Angeles County Superior Courts was handled by judge Maren Nelson.

In the meantime, you must be wondering and longing to know more about this man known as Lorenzo Cascino and his identity. But, don't worry, we got you.

Cascino who flaunts brown hair and matching light Brown eyes was educated at the Università degli Studi di Milano, one of the largest Universities in Europe, where he earned a degree in Political Science.

And, throughout his career, Lorenzo has excelled in the business sector as a marketing director. According to his LinkedIn profile, Lorenzo is highly skilled in the sector of Art Direction, Email Marketing, Direct Marketing, and Corporate Communication.

And, like Danielle Bisutti, his former wife, Cascino also resides in Los Angeles.