Home Article Lindsie Chrisley and Will Campbell's Married Life. Why are they getting a divorce?

Lindsie Chrisley and Will Campbell's Married Life. Why are they getting a divorce? 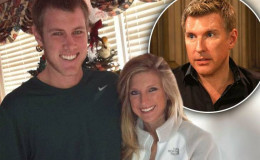 Lindsie and Will have married about four years ago in 2012, after few years of dating together. Lindsie eloped with the approval of her family with Campbell At the beginning of marriage, they were so much happy. From their 4 years of successful marriage, the couple was blessed with a child Jackson together, who is 3-years-old. Unfortunately, Reports claimed that the couple is getting divorced.

There is a bad news for all the fans of Lindsie Chrisley and Will Campbell as they are no longer together. The couple has decided to get a divorce after being married for about four years.

They were undoubtedly one of the hottest couples but it does not matter now, Does it? Well, let us discuss the dating and married life of the former couple.

Lindsie Chrisley and Will Campbell Married Life and Children

Lindsie and Will got married about four years ago in 2012, after few years of dating together. At the beginning of marriage, they were so much in love and were happy together.

From their 4 years of marriage, the couple was blessed with a child Jackson who is now 3-years-old. Unfortunately, Reports claimed that the couple is getting a divorce.

Are they getting a Divorce?

Lindsie and will's marriage didn’t work properly.  So, the couple is finally separating from each other. The 26-years-old reality television star revealed to people that she and her husband are Divorcing as they have grown apart.

Lindsie said, "He was my first love. We got together when we were 19 years of age, and after some time we developed independently in various manners rather than together."

She said, ‘I have a feeling that I've turned out to be Free, I've come more into myself, I'm sure with myself and I simply don't feel that relationship gives me what I require any longer. I've outgrown the relationship."

She hopes that they remain as a friend in the future. He still holds a special place in her heart. It seems she still love him.

Over the few years, Campbell left to attend the family’s reality show, 'Chrisley Knows Best' and she revealed that the two actually got separated for some time two years ago.

They had a little time apart, and then they got back together in the hopes that maybe it could work for their child.

However, they realized that they are not happy with one another and are trying to make it work just for the child but not for them personally.

So, finally, they made the decision to quit their married Life. Chrisley filed for Divorced from Will Campbell.

Lindsie thinks that she has no any negative experience from her married Life. Both the couple shares the blame for their separation.

Lindie said, ’I don’t have anything bad to say about Will. Her father Todd Chrisley said, "Lindsie and Campbell got married at very early age, not with our approval, but with that, he has been a very good father to my grandson.

My love for you is never ending & I fall more in love with you everyday. Give me all your sugar kisses baby tootie!

At the end, both the couple just wants to move forward with their Life. They both come to a mutual agreement and understanding that their separation is going to work for both of them, promising each other to make the best situation for their Child.