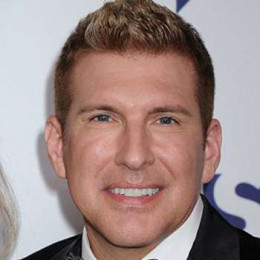 Entrepreneur and producer of the series Chrisley known best for the USA Network, Todd Chrisley has been on the heights of fame for his role in the reality series. He is the owner of Chrisley and company and has opened several business ventures. He has a passion also for the fashion industry and seems to be willing to spread the vision related to the matter in the world.

Todd Chrisley was born as Michael Todd Chrisley April 6, 1969, in Georgia, the US to Faye Chrisley and Gene Raymond Chrisley. He is an American of white ethnicity.

He has raised along with his brother in Westminster, South Carolina. He completed his schooling at the local school of Westminster.

Chrisley has appeared in several TV series in his career including, Steve Harvey and The Domenick Nati Show. In 2014, he starred in American television reality show, Chrisley Knows, the shows centers on the wealthy Georgia real estate mogul Todd Chrisley and his family. The show is in its fifth season.

Chrisley, 48 is a married man and fathered five children. He exchanged a vow with  Julie and the duo is proud parents of a daughter.

However, previously he was married twice, first, he married Teresa Terry in an intimate ceremony. The couple shared two daughters, Lindsie Chrisley Campbell, and Kyle Chrisley. However, due to a personal issue, the pair divorced in 1996.

His daughter started living with him after his divorce. In May 1996, he again gets married to Julie Chrisley. They have two daughters, Grayson Chrisley, and Savannah Chrisley, both of them are actresses and a son named Chase Chrisley who is an actor known as Steve Harvey.

Currently, he is living a blissful married life with his wife and kids in Westminster, South Carolina. His elder daughter was married to Will Campbell in 2012 but they divorced after four years of marriage.

Todd Chrisley has earned a decent amount of net worth from his career but due to bankruptcy his estimated net worth is as low as -$46 million but he still lives in a mansion costing around $2 million.

In 2012, Chrisley filed for personal bankruptcy; CAM for corporate bankruptcy in 2013. In his bankruptcy filing, he claimed to have a mere $100 million in cash, $4.2 million in total assets and nearly $49 million of debt.

Teresa was the wife of Chrisley previous to his rise in fame. she reportedly accused him of sexually abusing her.

Julie is the second wife of Todd. She also stars on the show Chrisley known best and has three children with Todd.

Lindsie is the first daughter of Teresa and Todd.

Kyle is the second daughter of Teresa and Todd.

Savannah is the daughter of Julie and Todd.

Chase is the son of Julie and Todd.

Grayson is the son of Julie and Todd.