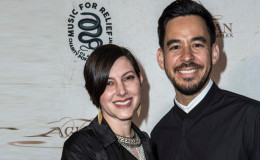 Linkin Park's Mike Shinoda spotted walking with his wife Anna after two weeks of the death of Chester Bennington. He married his wife in the year 2003.

Linking Park's Mike Shinoda is finally trying to get back into the normal life after his bandmate Chester Bennington's death.

Shinoda was spotted with his wife Anna Hillinger as they left Beverly Glen Market whom he married in the year 2003.

They have an awesome family life with two children. Know more about the singer and his personal life over here!

Shinoda was spotted with his wife Anna Hillinger walking near the Beverly Glen Market in Los Angeles.

It seems that Shinoda is trying to overcome the mournful environment; the tremendous loss for the Linkin Park.

Mike and rest of the band members would've been the East Coast this week. Yes, the tour was canceled after Chester's suicide.

One week. Feels like forever. I’m here for a couple updates. I know these links aren’t clickable. Just type them out in your browser; they're easy to remember. 1.) If you need a (local) place to celebrate Chester, look to tiny.cc/lpmemorial and all the amazing fan sites I’ve previously mentioned. 2.) If you’re having suicidal thoughts, go to chester.linkinpark.com 3.) If you’re going to buy merch in honor of Chester, consider who the purchase benefits. Don’t give money to scumbag bootleggers and opportunists. Linkin Park official merchandise is at store.linkinpark.com 4.) If you want to donate in honor of Chester, do it at musicforrelief.org 5.) Brad, Joe, Rob, Dave, and I love you all very much. Thank you for respecting our privacy during this extremely difficult time.

He along with his bandmate Joe Hahn attended the private funeral and eulogized Chester on Saturday in Palos Verdes.

Mike tied a knot to his longtime girlfriend Anna on 10 May 2003. She is a published author; her first book was called Learning Not to Drown.

The book was recommended for those aged 14 and up.

Anna is involved in charity for the band. The website said,

"She has led efforts with the band’s non-profit, Music For Relief in the U.S. and abroad."

The couple is gifted with two adorable children.

Worth mentioning, the couple have been in a relationship for almost 14 years with no divorce rumors.

We can say that they will definitely be with each other the entire life.