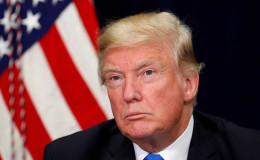 With the latest scandals which are all over the TV screen and on the front page of the newspapers, one must think was there ever a President before Donald Trump, who was more scandalous.

Many of you will be surprised to find out that previously the White House has seen it's fair share of scandals, probably more controversial than the current scandals we're seeing.

7 Most Scandalous Affairs Of The American Presidents

These days it has become an everyday affair whenever we open our TV and found out about the Donald Trump's affairs with several women.

Well, in today's section we'll take a look at how the current president fares himself with previous one in the office.

What grave accusation when the person with the most power in the country is accused of raping a woman and even having a love child with her. Grover Cleveland, the 22nd and 24th President of the United States, took power when he was 48-year old. 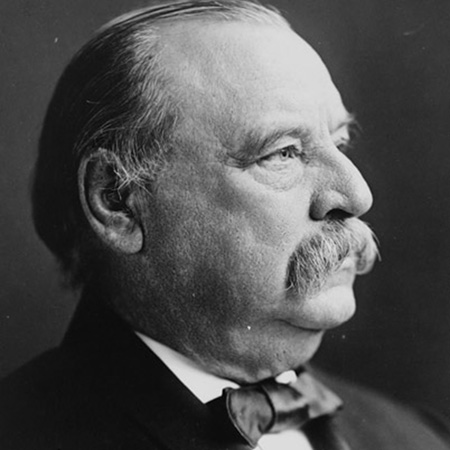 Grover Cleveland was accused of raping Maria Halpin and fathering a love child with her
Source: Famous Biographies

Soon after taking power he married Frances Folsom Cleveland Preston, who was 27-years her junior. But the age gap wasn't the only thing which was controversial, his courtship with Maria Halpin was.

According to her, Grover took her out for a dinner and soon after the dinner ended he decided to accompany her to home and brutally raper her. He even went as far as to threaten her to ruin her life if she tells anyone of this.

After some time, it was revealed Maria gave birth to his child, a boy. As soon as he found about this, he threw her to the mental asylum and his love child to an orphanage.

Often regarded as one of the masterminds in the United States politics, George H.W. Bush, served as the 41st Presidents of the US of A.

The Washington Post dropped a big bombshell when it revealed about the extramarital affair of Mr. Bush on an article. According to the post, his political assistant, Jennifer Fitzgerald helped him in a 'number of positions.' 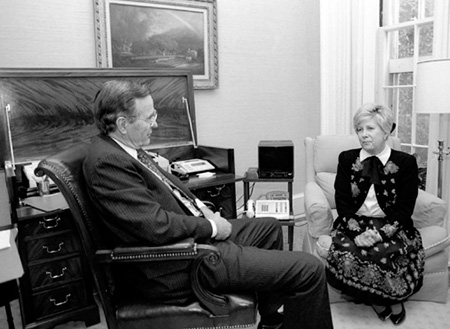 George H.W. Bush along with Jennifer Fitzgerald in 1989
Source: Penguin

Though many of the White House superiors and many leading journalists already had a clue regarding the alleged affair, it wasn't until 1988 when LA Weekly claimed Fitzgerald has spoken about the affair.

Soon numerous tabloids started talking about the incident. In her book, The Power House, journalist Susan Trento claimed how US Ambassador Louis Fields had arranged for the same guest house for both Jennifer and George during an official visit in Geneva, Switzerland.

The Bush family, though always refused such allegations, the pictures, and the evidence states otherwise. 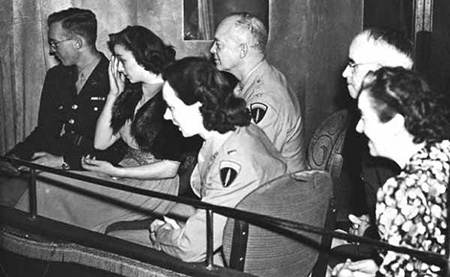 In order to make do with his responsibility, he resorted to spending more time with his work and less with his wife, Mamie. During the time as the commander, Dwight, aka, lke, started spending a lot of time with his secretary Kay Summersby.

In many pictures, the duo was seen a lot closer than they should be as the boss and secretary. After many years, the duo officially consummated their relationship in 1944. According to him, his marriage to Mamie had killed something in him.

And as soon as the war ended, lke asked his superior officer to relieve him of his duty so he can divorce his wife and marry Kay. His superior blatantly refused and asked him to face the consequences if he divorces his wife. Because of this, the long-term affair ended in 1975.

Franklin Delano Roosevelt, famously known as FDR, served as the 32nd President of the United States. He won the Presidential election a record four times and served from 1933 to 1945.

Unlike many of his fellow Presidents stated here in this section, his relationships are more complicated. At one time it was rumored that both, him and his wife, Eleanor Roosevelt had their respective mistresses inside the white house.

Among the Washington D.C. elites, the news was already swirling in regarding FDR's affair with his secretary Lucy Mercer. She served as the catalyst for the complication in FDR's marriage.

Soon after Alice Longworth, found out his alleged tryst and she snitched the information to Eleanor. Upon hearing such ridiculous matter, she demanded a divorce. 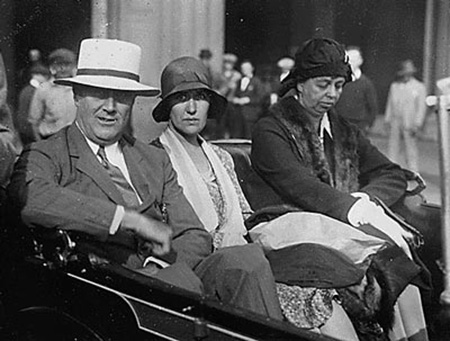 FDR along with his wife Eleanor and his mistress Lucy Mercer(middle)
Source: Pinterest

It was a much-needed boost for FDR as he wanted to marry Lucy and divorcing his wife was a big problem. But he ran out of luck when his mother threatened him that she'll withdraw her financial support if he divorces her.

In the end, FDR chooses career and money over his love and asked Eleanor to forgive him. She forgave him but only in the condition they'll never share the same bed. Soon after the dust settled, Eleanor befriends two lesbian couples, Elizabeth Read and Esther Lape and Nancy Cook and Marion Dickerman.

This was probably the biggest scandals of the 1990s when the 42nd President of the United States, Bill Clinton, got himself involved in the sexual relationship with White House intern, Monica Lewinsky. 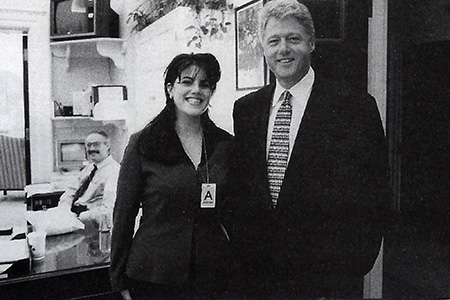 Bill Clinton along with Monica Lewinsky at the White House
Source: NY Post

Monica began an unpaid internship at the office of White House Chief of Staff Leon Panetta. In the December of 1995, she got a paid job in the same office.

According to the reports, they were involved sexually from 1995 to 1997. Bill never accepted his leud relationship with Monica and in a press conference he went on to say,

"I did not have sexual relations with that woman, Miss Lewinsky."

His marriage with Hillary Clinton though survived the big scandal. The scandal is sometimes referred as Monicagate, Lewinskygate, Tailgate, Sexgate, and Zippergate.

Ever since Donald Trump took power into the office, we've seen nothing but miseries for the newest President of the United States. Even though the Celebrity Apprentice alum seems unfazed by all the allegations against him.

First and foremost, American Adult actress, Stormy Daniels accused him of having an illicit relationship with her in the year 2006, same year, his son, Barron Trump was born. 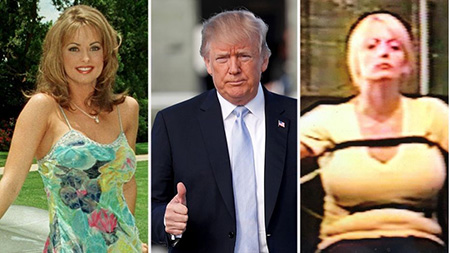 Donald Trump was accused by Stormy Daniels and Karen McDougal of having an illicit affair with them
Source: Latest GLA News

In order to keep her mouth shut, shortly before the 2016 Presidential election, Trump's lawyer Michael Cohen gave her $130,000 in hush money. Earlier this year she filed a lawsuit against him.

Then the same year, Playboy actress Karen McDougal claimed she had an affair with him in the year 2006. Their affair lasted for over 10-months. The exclusive story was purchased by National Enquire for a staggering amount of $150,000.

Well, his wife, Melanie Trump is yet to make any remarks on her husband's alleged tryst.

Both John F. Kennedy and Marilyn Monroe are a cultural icon in the country of the United States. John made a name for himself in the political field, whereas Marilyn in the entertainment industry.

She is widely famous for her infamous photo shoot of her skirt being blown away as she posed for the picture. Now in front of the public, Marilyn and JFK first met at the April in Paris Ball on April 11, 1957. 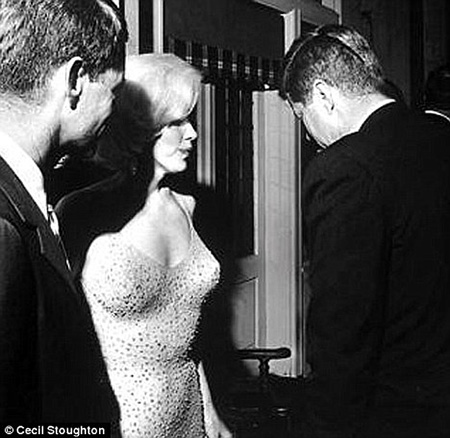 The event took place at Waldorf-Astoria Hotel in New York City. That was the first time there were photographed. Then on May 19, 1962, during JFK's birthday, she sang "Happy Birthday, Mr. President" in front of a large number of audiences.

Soon numerous photo of Marilyn and JFK came out. In one of the photo, the alleged pair is involved in a PDA. Now according to many sources, the duo didn't meet publicly very often as the singer tragically died in the year 1962.

But before that sources claim the couple might have become intimate at the Bing Crosby's party at his residence in Palm Springs, California.