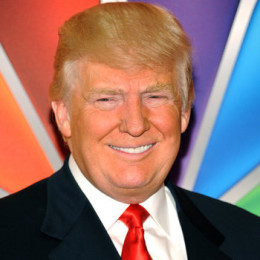 Donald John Trump is the current President of the United States. Before becoming the president, he was a television personality, business author, real estate developer and was widely famous as the founder of The Trump Organization.

Born on June 14, 1946, as Donald John Trump in Queens, New York City to the father, Frederick Christ  Fred Trump, and mother, Mary Anne Trump, he grew up in the Jamaica Estates neighborhood of Queens. Donald has four siblings, Fred Jr., Maryanne, Elizabeth, and Robert. He was the fourth child of his parents.

Trump’s grandparents were originally from Germany and emigrated to the US in 1885. His mother was an immigrant from Scotland and moved to New York at the age of 18. His father, Fred owned a real estate company established by Donald’s grandfather and sold thousands of houses, apartments, and barracks.

Moving on to Donald’s education, he attended the Kew-Forest School until seventh grade. His parents enrolled him in the New York Military Academy at the age of 13 when they found out that Trump traveled to Manhattan without their permission. His capability was seen at the academy as he was both academically and socially good and also became the student leader.

Later in August 1964 Trump attended Fordham University and after two years transferred to the Wharton School of the University of Pennsylvania as it was one of the few University that provided real estate studies at that time. In 1968 Trump graduated with a Bachelor of Science degree in economics.

From an early age, Donald was highly influenced by his father as well as Manhattan developer William Zeckendorf and showed interest in real estate. Donald even worked at his father’s company, Elizabeth Trump, and Son, a real estate development company.

Donald Trump took over his father’s company in 1971 and became the president while his father became the chairman of the board. He then changed the name to The Trump Organization. In 1973 Justice Department accused the company of not renting apartments to African-American.  However, the Trumps admitted no wrongdoing and stated the Urban League an intermediary for qualified minority applicants.

Trump moved to Manhattan and built up connections with influential people. He struck his major deal in 1978 as he purchased a half share in the decrepit Commodore Hotel, mainly funded by $70million construction loan guaranteed by both Fred Trump and the Hyatt Hotel chain. Der Scutt designed the new structure and after the remodeling was completed the hotel reopened with the new name Grand Hyatt Hotel.

Trump used to attractive engineering structure to get public recognition. In 1998 after overcoming all the conflicts, proving he is one of the best negotiators, he got approval to build the Trump Tower. He also bought Taj Mahal Casino in Atlantic City, New Jersey. The casino opened in April 1990 and was named the most expensive casino as it cost $1.1 billion for its construction.

Well, Donald Trump grabbed the attention of many people around the globe with his business tactics. He also owned Miss USA pageants from 1996-2015 and also appeared on it often. Besides that Trump also co-produced a reality TV show, The Apprentice’ where the contestant’s business skill was judged. He gained the media attention as well as made a fortune from the show. Trump claimed to have earned $213 million from the show.

Donald represented the Republican and said that he would be the greatest jobs president that God ever created. His slogan during his campaign was “Make America Great Again” and during his speech talked about domestic issues such as illegal immigration, offshoring of American jobs, the U.S national debt and Islamic terrorism.

His speech stirred controversy which gave him free media promotion that elevated his standing in the election. His comment about Mexican and immigrants didn’t go well with the public and caused NBC to break ties with Trump.

NBC released a statement after his speech saying, “Due to the recent derogatory comments made by Donald Trump regarding immigrants, NBCUniversal is ending its business relationship with Mr. Trump.” They also added that the annual Miss USA and Miss Universe Pageants, which was a joint venture between NBC and Trump, will no longer be aired on NBC.

Donald Trump quickly became the front-runner among seventeen candidates in the Republican, and by the end of May 2016 his opponents had suspended their campaign, and by July he was officially nominated as the representative of Republican Party in Republican National Convention along with Indianan Governor Mike Pence and his running mate.

On November 8, 2016, Donald won the general election in a surprise victory over his Democratic opponent Hilary Clinton. On January 20, 2017, he commenced his role as the 45th President, becoming the oldest and wealthiest person to hold that title and also the first one without prior military or government service and the fifth to have won an election while losing the popular vote.

After being elected many questions arose regarding how he would avoid conflicts of interest between his work in the White house and his business activities. On January 10, 2017, at a press conference, Trump announced that his and his daughter Ivanka would resign all roles with the Trump Organization. His two sons Don Jr. and Eric would take the responsibilities and run the business along with Chief Financial Officer Allen Weisselberg.

Trump has been involved in many controversies.  During his speech for the nomination, he commented about Mexican and immigrants saying “We are going to build a great border wall to stop illegal immigration, to stop the gangs and the violence, and to stop the drugs from pouring into our communities.” This comment didn’t settle very well with the public and caused a riot and made him the most hated candidate.  It led to the public making many memes and jokes about him and his speech.

Another controversy he got himself tangled in is the Access Hollywood controversors.  On October 7, 2015, just two days before the second presidential debate between Clinton and Trump, a 2005 recording of Donald and Billy Bush surfaced ruining Trumps already bad reputation. A three-minute long recording where Trump is telling the anchor Billy Bush how he kisses and gropes women forcefully.  He said, “I just start kissing them and don’t even wait. And when you’re a star, they let you do it and you can do anything.”

During the recording, Trump was talking about his efforts to seduce a married woman. The recording.  After the recording had surfaced, the reaction was immediate. Many Republicans like  John McCain, Kelly Ayotte, Mike Crapo, Shelley Moore Capito and Martha Roby withdrew their support for Trump. The public was furious with him. His language was described as vulgar, sexist and descriptive of sexual assault. Later, 15 other women came forward with accusations of sexual misconduct.

Trump made a public apology on Facebook in which he said, “I’ve never said I’m a perfect person, nor pretended to be someone that I’m not. I’ve said and done things I regret, and the words released today on this more than a decade-old video are one of them. Anyone who knows me knows these words don’t reflect who I am. I said it, I was wrong, and I apologize.”

In his second response to the controversy, he accused the former President and husband of Trump’s Democratic opponent, Bill Clinton of abusing women and that Hillary had bullied her husband’s victim.

“This was locker room banter, a private conversation that took place many years ago. Bill Clinton has said far worse to me on the golf course — not even close. I apologize if anyone was offended.”

Donald Trump has been married three times and has five children from his marriages. Trump first wife was Czech model Ivana Zelnickova. They got married on 7th April 1977 at the Marble Collegiate Church in Manhattan in a ceremony performed by the Reverend Norman Vincent Peale.

The couple divorced in 1992 after it was found that Trump had cheated on Ivana with actress Marla Maples. Trump had three children from this marriage: son Donald Jr. (born December 31, 1977), daughter Ivanka (born October 30, 1981) and son Eric (born January 6, 1984).

In October 1993, his girlfriend and now ex -wife, Maples have birth to Trump’s daughter Tiffany, named after Tiffany & Company. The couple later married on December 10, 1993, two months after their daughter was born.  The couple divorced on 1999 and Tiffany has been living with her mother in California. Trump's first two marriages ended in widely publicized divorces.

On January 22, 2005, Trump married Slovene model Melania Knauss at Bethesda-by-the-Sea Episcopal Church in Palm Beach, Florida, followed by a reception at Trump’s Mar-a-Lago estate. Many rumors of Trump cheating on Melania surfaced but they are still together and going strong. Melania acquired United States citizenship in 2006 and gave birth to their son Barron on March 20.  After Trump won the election, Melania became First Lady of The United States.

Trump is one of the wealthiest and most successful businessmen, but there was a time when his business wasn’t doing very good. Personally, he didn’t file for bankruptcy, but his business did suffer it. Between the time in 1991 and 2009, his hotel and casinos were declared bankrupt six times, because it couldn’t meet the required payments and renegotiate debts with the bank. But to his luck, the business was allowed to run while the renegotiation was being made.

The businesses that suffered bankruptcy were:

In 2017 Trumps net worth is estimated to be around $3.5 billion making him one of the wealthiest politicians. His major income comes from The Trump Tower, an organization his father started and now run by his sons. Trump has many estates, hotels, and casinos inside and outside New York as well.

She was a model and a native of the Czech Republic. Together they had three children. After her divorce with Donald she received $25m and a mansion in Greenwich, Connecticut.

He is the eldest son from his first marriage. Following his dad footstep he is an American businessman. He is already married.

She is very beautiful and gorgeous. Professionally she is businesswoman, writer, and former model. She is also executive Vice-President of The Trump Organization.

He is the youngest child from his first marriage. He is executive Vice President in Development and Acquisitions, at The Trump Organization.

She is the only child from his second marriage. She is very gorgeous.

He is the only son from his third marriage. He weighed 8 pounds and 5 ounces when he was born.