Home Article Mary-Kate Olsen Is Living Happily With Her Husband Olivier Sarkozy And Two Children; Detail About Their Relationship

Mary-Kate Olsen Is Living Happily With Her Husband Olivier Sarkozy And Two Children; Detail About Their Relationship 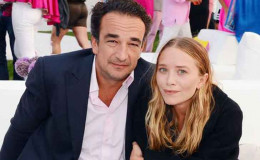 In the past, people married because their age-matched but today they marry because they know they can get along well together.

Age makes a topic of huge consideration when it comes to getting married. Some people, however, defy this trend and prove that love is above anything else, including the age.

The multi-talented American fashion designer, businesswoman and author Mary-Kate Olsen is one such name who tied the knot with a man of almost her father's age. If you are curious to know about the couple of huge age difference, then you are in the right place.

Get detailed information about Mary-Kate Olsen's relationship with her husband and children.

Mary-Kate Olsen has multiple identities. She is a fashion designer, businesswoman, author as well as former actor and producer. Olsen, the co-founder of The Row, Elizabeth, and James, etc. fashion brands, is the winner of numerous awards for her designs and acting as well.

Olsen tied the knot with a U.S. based French banker Olivier Sarkozy on November 27, 2015. Their wedding took place in a private house in New York City, attended by only 50 of their close friends and relatives.

This duo dated from May 2012 and Olsen informally revealed their imminent marriage, showing her finger with what appeared to be an engagement ring.

This pair does not share much about their private life. In the social media, Olsen is closer to her twin sister Ashley Olsen than to her husband, Sarkozy. Mary-Kate shares her husband's photos very less often but never misses out Ashley.

Having my peers judge me for being in a healthy, committed relationship with a mature man who gives me love, support and two stepchildren while they're still waiting for that text back is where I see myself in 10 years. #knowyourworth #marykateolsen #oliviersarkozy

Sarkozy is the half-brother of former French president Nicolas Sarkozy who served as the President of France for 5 years between May 16, 2007, and May 15, 2012.

Olsen is 17 years younger than Sarkozy and so far, they are getting along well together. In addition to the difference of their age, this couple is of different nationalities. Both of them have no problem going out in the public together.

Olsen and Sarkozy do not share any child yet but they have kids to look after. Before coming across Olsen, Sarkozy was already a father of two children with his former wife Charlotte Bernard.

Olsen does not bother caring for her stepchildren, rather she feels blessed to have them. She might not be interested to become a mother anytime soon.

Although Olivier Sarkozy is her first husband, Mary-Kate Olsen dated some guys before her official marriage. Unlike her brother Trent Olsen who keeps a low-key profile, much about Olsen's dating history is known.

Rumor has it that Olsen's first known boyfriend is television producer David Katzenberg. They dated for nearly a year, however, the exact duration of their dating history is unknown. Katzenberg is the son of the co-founder of Dreamworks Pictures, Jeffrey Katzenberg.

Olsen reportedly dated Stavros Niarchos who was her second boyfriend. According to some references, they dated for six months between April 2005 and October 2005 and split up due to reasons unknown to the public.

Her third boyfriend was the photographer Maxwell Snow. According to some sources, they dated not more than a year, however, how they started and ended their relationship is a complete mystery for the public.

Between 2007 and 2008, Olsen was found to be dating Heath Ledger. Unfortunately, she was left disheartened alone due to Ledger's death. However, she never told the public that he was her boyfriend.

There are also rumors that Olsen dated an artist named Nate Lowman. Nonetheless, sources do not have concrete proofs to make it a truth.