Home Article Moving On From Her Boyfriend! Kourtney Kardashian Steps Out With Model Luka Sabbat On Friday

Moving On From Her Boyfriend! Kourtney Kardashian Steps Out With Model Luka Sabbat On Friday

Kourtney Kardashian is an American television personality who is famous for her role in Keeping Up With The Kardashian; She was recently spotted with model Luka Sabbat; Are They Dating? Also, see..

Kourtney Kardashian stepped out with model Luka Sabbat who is also in close proximity to the Kardashian family.

Moving on with another man!

Keeping up with the Kardashian star Kourtney Kardashian stepped out from The Nice Guy in Los Angeles on Friday alongside a new companion.

The man was none other than the 20-year-old model and actor Luka Sabbat. This is Kourtney's first outing since her break-up with Younes Bendjima. 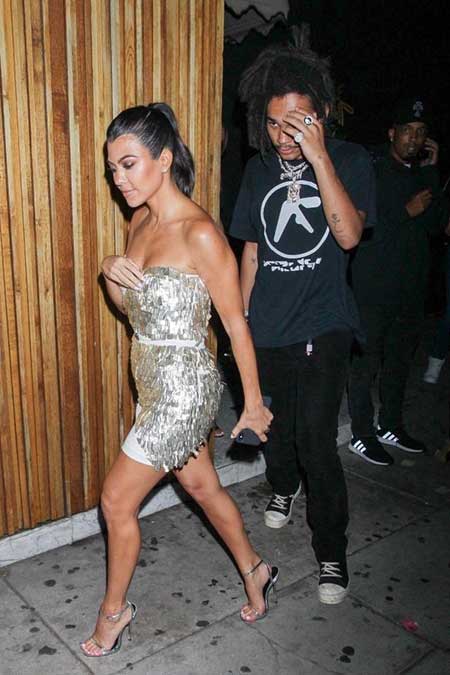 Kourtney and Luka stepping out in from The Nice Guy
Source: Press From

The reality star was wearing a figure-hugging sparkly white mini-dress. Whereas Luka was wearing matching pants and sneakers along with a black t-shirt.

She also shared a picture of her from the same night.

Luka is also quite close to the Kardashian and Jenner family. He was recently invited to 21st birthday of Kylie Jenner. He also attended the Labor Day Party hosted by the Kardashian family this month.

A source close to the family said,

“Kourtney has known Luka forever. He’s a friend of the entire family and always hangs with the girls. There is nothing romantic going on.”

Luka has been close to the family and also walked in Kanye West's 2015 season 1 Yeezy show.

Kourtney and her former boyfriend Younes broke-up two weeks ago. The mother of three was dating for around 2 years before calling it quits. The couple had previously briefly split up a few months ago only to get back together.

But this time looks like the duo has split up for good. Kourtney was previously in a long-term relationship with Scott Disick from 2006 to 2015. They share three children, Mason, Reign, and Penelope Disick.