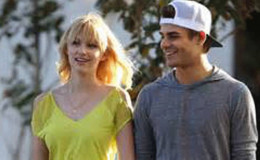 Alex Witt has become one of the "controversial queens" in the American News Industry because of her different scandals and disputes mostly related to owing money, having marital issues, gun control, women's abortion rights and so on.

Despite several accusations and allegations, Alex has still managed to be one of the recognized faces in the American Media industry as the famous host of MSNBC show "Weekends with Alex Witt".

Her boldness and originality have created exciting curiosities about her personal life and relationships among her well-wishers. So, here we will provide you all the hot gossips about this beautiful and fearless woman.

As per our sources, Alex is no longer an eligible bachelorette as she has already got married to her long-time boyfriend, and now a blessed husband Bill Sorensen.

Bill Sorensen, is a Television Producer, but further details about his professional and personal life have not been provided on the web.

As for now, all that can be said is that they have been married for a long time and are living a happy life.

Rumors of Alex and Witt Getting Divorced!

At some point in the duo's married life, rumors related to the pair parting ways and getting divorced swirled up massively in the media.

Not only that, there were also malicious gossips about their alleged sexual relationship with their co-workers.

The rumors were immediately swept off under the mat by the representatives of Alex and told the sources that they're doing well in their marriage and the divorce is out of the picture.

The couple has two beautiful children, a daughter named Caroline and a son named Charlie. They have been well brought up by their parents and are living a happy life with a perfect family.

However, during summer of 2011, Alex and her husband Bill were dragged into court when one of their old friends, Stephanie Jones who is a successful Manhattan lawyer and real-estate flipper, filed a case against them for the recovery of $65000 that Alex has apparently borrowed from her.

Instead, she bought an expensive Porsche for herself and went on for luxurious vacations with her husband and children.

The case brewed a lot of malicious gossips about the blue-eyed blonde news anchor and it was settled soon out of the court. Despite such

Despite such allegations, she has continued working for MSNBC and still has the same X-factor while hosting a news.

Here's the video of Alex Witt covering a news on Weekends with Alex on MSNBC.

Although Alex, who is a member of the National Society of Washington Family Descendants, has been dragged into quite a lot of controversies, she is still loved by all her well wishers.

Similarly, we also hope that she continues shining bright with her bold attitude in her professional as well as in her personal life.