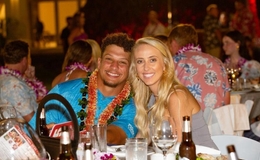 2022 became far better for The Kansas City Chief's Patrick Mahomes and his wife, Brittany Matthews! The married couple announced a second newborn; a baby boy is on the way less than two years after welcoming their first child, Sterling.

Patrick Mahomes is winning in the love department along with his NFL career, and most importantly, it's a boy in Pat Mahomes's family. Let's dive into the article below and get every detail about the athlete and his personal life.

Pat Mahomes & His Wife, Brittany Matthews, With Second Child, Is it Boy or Girl?

Patrick Mahomes and his wife Britanny Matthews revealed the exciting news for his growing family on May 29, announcing that baby #2 is on the way. The duo declared the sex of their second baby during a gender reveal party on June 26, 2022. Why don't you have a look!

The couple reveals the baby to be a boy. SOURCE: Instagram(@brittanylynne)

The married pair organized a party inviting their family and friends, revealing the baby's gender. The proud parents posted a minute-long video with the caption," Boy or Girl?"

And the pair are seen spending crazily on their baby gender reveal party. The couple took quite some time to reveal the gender of their child to the fans and media, and it's a boy.

" Big sisters duties. " Coming soon," Patrick took to his Instagram and posted a series of photoshoots on his social media, which showed the toddler holding a sign that revealed that she was becoming a sister on Monday.

Also, the first couple of Kansas City, in a joint cute Instagram announcement, revealed the news over the memorial day weekend on May 29 alongside their one-year-old daughter Sterling, who seems to be on the festive with caption writing, "Round 2!."

Previously, the mother-to-be cradled her growing baby bump in a series of stunning snaps from a recent maternity shoot. Well, Patrick and his fiance had a lot to celebrate these days. 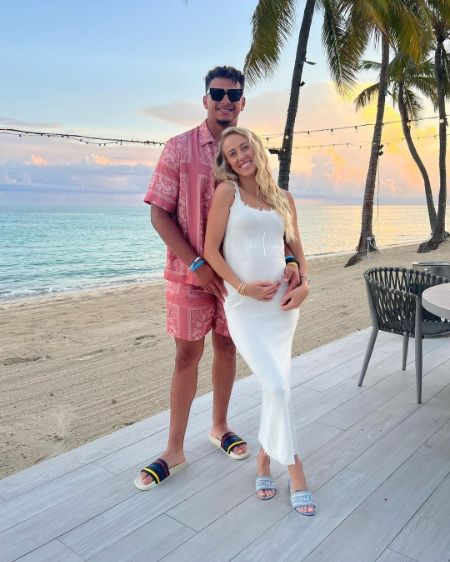 To add up, Patrick was hoping for a boy with the second child. What's more, Brittany didn't let pregnancy and a toddler keep her from celebrating Patrick Mahomes on his second Father's Day!

On Saturday, Brittany Lynne Fitness founder, pregnant with the duo's second child, honored her QB husband by taking him and their 15-month-old daughter on a boat outing to make the special occasion," It's a boat day," he posted on IG. 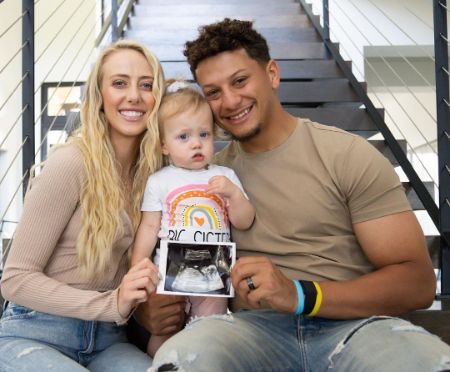 Brittany Matthews and her husband with an ultrasound of their 2nd child. SO CE: Instagram(@brittanylynne)

Not to miss, Patrick shared a sweet image of him smiling brightly at the camera as his soulmate by his side with Sterling sitting on his lap. Both Britanny and Patrick sat in a grassy field and had put on plain tops and ripped jeans.

In the third picture, the brood was sitting on a staircase and holding an ultrasound, which features their daughter wearing a shirt across the front with a rainbow. Their first child, a daughter named Sterline Skye, on February 20, 2021, had a bit of a wardrobe change.

After all, a year since their first child's birth, Sterling Skye, Mahomes and his lady love Matthews are adding to the depth chart with their second child on arrival. "My one today! Dad y loves you!" Mahomes shared on Instagram.

During Pat Mahomes's sophomore year at Whitehouse High School in 2012, Mahomes started dating a certified personal trainer named Brittany Matthews ahead of the 2020 NFL season. While Britany and Mahomes studied at Texas Tech., the bot was a high school student. 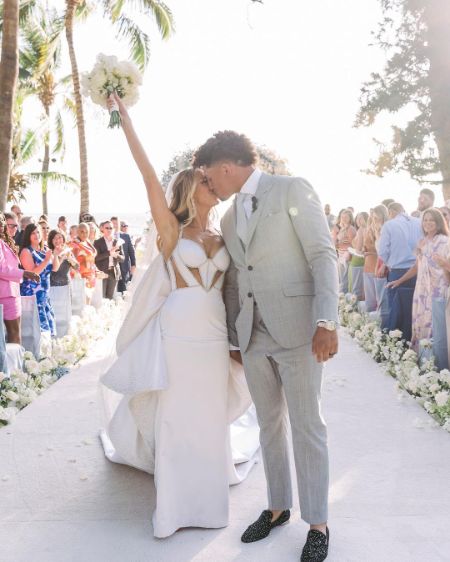 Brittany Matthews and her husband during their wedding. SOU E: Instagram(@brittanylynne)

Despite attending different schools, the high school sweetheart maintained their relationship throughout college. The guy popped the question to his sweetheart, who is also Mahome's birthday.

At Arrowhead Stadium in Kansas City, Missouri, in September 2020, on the same day, Pat arranged the special championship ring for winning Super Bowl LIV over the San Francisco 49ers. It's poetic that they both received rings on the same day.

After nearly ten years together, the pair appears stronger than ever. The longtime couple revealed their pregnancy news to the world in September 20020, shortly after getting engaged.

Further, Mahomes was ready to take their relationship to new heights as the lovebirds officially shared the vows in Maui, Hawaii, on March 12 at the lavish ceremony.

Well, Manhome's Chief teammate Travis Kelce was a groomsman while their daughter had a role of a flower girl and his brother Jackson was the best man. After their wedding, the duo head to St, Barths for their Honeymoon, where they enjoyed their tropical trips.

The famous NFL athlete owns a joyous married life. Thei closer bond is an example for everyone to look at, as they stay away from problems and live a romantic life. With happiness surrounding them, and the commitment, loyalty and parenting they hold, we expect them to be together for eternity.