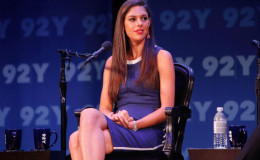 Television personality Abby Hunstman married Jeffrey Bruce Livington in 2010 and has been living a happy married life since then. She is one of the popular American reporters and is known best for being general assignment reporter for FOX News Channel.

She started her career at an early stage and the success she has achieved is very much appreciable.

Abigail aka Abby is one of the most talked about television personality because of her work and also her breathtaking smile!!.

Currently, she is living a happily married life with her college sweetheart Jeffrey Bruce Livingston. She married Jeffrey on August 27, 2010, according to The NewYork Times.

The couple tied the knot in Washington National Cathedral and the ceremony was performed by The Very Rev. Samuel T. Lloyd III, an Episcopal priest.

Abby met Jeffrey when both joined the University of Pennsylvania and started dating for a very long time. This very beautiful,

The very beautiful,32-year-old, is living a fairytale life with her husband and states like every girl, the best day of her life was her wedding day.

It is clear that their relationship as a married couple is going very smooth and no rumors of Abby's extra-marital affairs have been heard.

The only gossip that has been roaming around the city is how fun and romantic her life is and how much she loves her family.

Don't Miss: Abby Huntsman and husband Jeffrey Livingston were captured getting cozy in an event: Shutting down all divorce rumors

The couple has already celebrated their sixth wedding anniversary which surely was a proud and emotional moment for both the couples and their family.

These lovebirds, surely enjoy spending time together, going on vacations and short trips.

Abby Huntsman; Her Relationships and Affairs

There's no doubt that Abby is one man woman. However, she does seem to have secret crushes here and there.

She claims that both of them are her celebrity crushes only and Jeffrey is the only love of her life.

However, her husband's information is very limited on the web which makes it difficult for us to talk more about how her married life is turning out.

The View co-host is pregnant with twins!

She revealed the good news exclusively with PEOPLE earlier in January 2019. She is now a mother of her 13-year-old daughter Isabel Grace.

Thank you for all the well wishes!! We are so excited/anxious/overwhelmed...what life is all about. Any helpful tips and advice welcomed Thanks to @people for helping us share the news

She explained about her pregnancy,

"When I went to the doctor I was, if anything, just concerned about it. Now, looking back, it makes sense, because I think the hormones were triple what they would normally be."

Earlier, she disclosed that she was body shamed during her pregnancy.

Who is Jeffrey B. Livingston?

Jeffrey B. Livingston is the son of Deidre Sharp Livingston and Bruce V. Livingston who works in Florham Park, N.J., as a business analyst for McKinsey & Company, the New York Consulting firm.

His parents own and operate Boyd Industries, a company in Clearwater, Fla., that manufactures and sells dental equipment.

Abby Huntsman: Know More About Her

She was born in Philadelphia but she grew up all over the place. She moved to Taiwan, then Utah where she was actually raised.

She went to FOUR high schools!! and again moved Virginia and then back to Utah and then to Singapore and back to Virginia again.

After her father's presidential campaign in 2012, she worked as a political commentator in ABC News Washington. Later she joined MSNBC's afternoon program 'The Cycle' on July 16, 2013.

Considering her hard work and dedication for MSNBC, she got the job at HuffPost Live, the Huffington Post's streaming network.

In October 2015, Huntsman joined Fox News Channel as a general assignment reporter. She covers the news of the day across the network's daytime as well as primetime programming.

She and her husband love spending the day just walking around the New York. After work, she usually spends time listening to music and her favorite band includes Avicii, Josh Groban Broadway soundtrack and also Taylor Swift!!