Home Article Abby Huntsman and Jeffrey Bruce Livingston has been married since 2010, See their family and children.

Abby Huntsman and Jeffrey Bruce Livingston has been married since 2010, See their family and children. 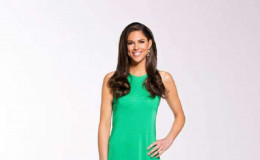 Today, we are here to talk about the family and children of Abby Huntsman and Jeffrey Bruce. As we all know Abby Huntsman is a well-known personality and is also the daughter of famous politician Jon Huntsman. However, she has not stolen spotlight because of her father’s name but she made it by herself with her passion and hard work.

She is a married woman and is living happily with her husband and children. Are they getting a divorce? Let us find out about their family life.

Abby Huntsman and Jeffery Livingston married on August 1, 2010, at the Washington National Cathedral. The ritual was performed by Rev. Samuel T. Llyod III and the Episcopal Priest.

They knew each other from the time of their college. Both husband and wife attended the same college and the duo's love story began.

After dating for a few years, they got married and it has been six years but love between them is still the same. Till now, there is no sign of extra-marital affair or the rumors of divorce.

Abby still loves to spend most of her leisure time with her husband and family. The Duo's relationship as a husband and wife has grown even stronger since they tied their knot.

Every year, the pair celebrate their anniversary with great joy and loves to enjoy time together going on Vacations and short trips.

Though, it’s been eight years of their marriage. She gave birth to her first child with her husband named Isabel Grace Livingston in November 2017.

The 32-year-old 'View' co-host is pregnant with twins. She revealed the happy news on 2nd January 2019 and the news left her husband on the floor in shock.

She said to People,

"I think he saw two sacs in there and I could see it on his face. He turned white, and then when the doctor told us, he fell. Another doctor had to come in, and they were wiping him down with towels and giving him sugar. I was sitting there with my feet still in the straps. I’m like, ‘This is ridiculous. I’m the one that has to physically do this.'"

Huntsman shared the news with her fans via Twitter post and posted a link of her interview with People:

In addition, during an interview session of actress Melissa McCarthy with Whoopi Goldberg, the actress was asked about her professional career amid her tremendous body size, Abby immediately interjected and talked about body-shamed during pregnancy.

"I've experienced a whole new level being pregnant this time. I will tell you, the last few days there have been more people that have said to me, 'Oh, you're only four months along? You look a lot further than that, you look a lot bigger than you should be at this point.' Things that, like, I'm sorry, but you just don't say that. If you're pregnant, you just want the kids to be healthy, you don't care what size you are."

What you don’t see is me panting for air after walking a flight of stairs, or a nice waddle in my stride that has now developed, but I know it will be all so worth it. Can only imagine the size of this belly in 4 months Have a whole new appreciate for all you twin moms out there!! @theviewabc (pic cred @nikki_cain )

Despite all, she's freely flaunting her baby bump in media and she seems rather so happy and delighted.

Having a crush on someone is a sweet and innocent feeling and like every other girl, Abby also has a ca a rush on a few celebrities. she said that she has a huge crush on two renowned celebrities, New England footballer, and American Actor George Clooney.

Later, she claims that both of them are her celebrity crushes. Jeffery is the only love of her life. She has not thought of anyone after he came into her life.

At 16, Abby began her career working as a behind-the-scenes position at Good Morning America.  In 2012, during and after her father’s presidential campaign, Abby worked as a political commentator for ABC News in Washington, D.C and Good Morning America in the New York City.

Eventually, one year later, she was listed as number 26 on the Forbes 30 under 30 list of up and coming members of the media.

In mid-2013, Abby joined The Cycle on MSNBC, Filling a vacancy created by the departure of S.E. Cupp where she was chosen as a second replacement on the show.

Prior to joining MSNBC, she worked as a host and producer of HuffPost Live. She has also been a frequent guest on CNN.

Later in October 2015, She joined Fox News channel as a general assignment reporter. She covers the News of the day across the Network’s daytime.