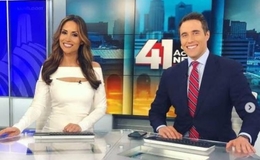 The journalist Rhiannon Ally is married to her anchor spouse, Mike Marza. The couple relishes a beautiful life together and shares three children. Here's everything you need to know about Ally's marriage & children in detail.

Rhiannon Ally, an American journalist, is popularly known for her contribution to the news media industry. Regarding her personal life, her marriage is going perfectly well. Ally lives a happily married life with her boyfriend turned husband, Mike Marza.

Journalist Rhiannon Ally got hitched to fellow anchor Mike Marza who is prominent for KSHB affiliated 41 Action News. The ceremony was an intimate one in the presence of close friends and family, on October 9, 2008.

In addition, Rhiannon first met her future husband, Mike Marusarz, at WIBW News. The job, however, kept them apart in different cities. Fortunately, when ABC News hired Mike, he moved to New York, where Ally was working.

The couple settled down in Missouri, Kansas, together after the marriage. The pair welcomed three kids; the first child, a son Roman Marza in January 2014.

Likewise, their older daughter named Camila Marza was born in 2016, and the youngest daughter Natalia Marza arrived in 2018, completing their perfect family. And, despite their busy schedule, the lovely duo still manages to take proper care of their adorable children. 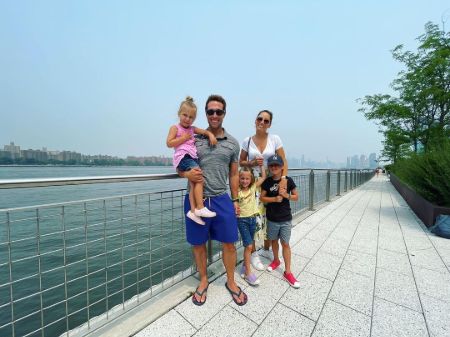 In the same vein, Rhianon and her husband love sharing the updates of the pair & their kids traveling places and playing at the beaches on their Instagram account. The two have been together for a long time. And, there's no rumor about misunderstandings and extra affairs or divorce of Ally and Marza.

Rhiannon Ally made it to the broadcast business against all odds. The Kansas city anchor made it through college despite her difficult childhood circumstances. Following graduation, Ally instantly began her journey with WIBW-TV in 2005.

Check out the video of Rhiannon Ally & her husband, Mike Marza, on KSHB 41 News.

Later in August 2009, Ally joined the 'Better' program until August 2011. Then Rhiannon served CBS News affiliate WCBS-TV and WFOR TV channels till May 2015. Alongside her co-anchor husband, Ally served for KSHB affiliated 41 Action News since June 2015.

All in all, Ally receives an anchor's salary of over $80,000 per annum. From her association in the broadcast industry for more than a decade, the news reporter amassed a net worth of no less than $1.5 million.