Gay Singer Ricky Martin and Husband Jwan Yosef Welcomes a Baby Girl; Know About His Wiki, Kids, and Past Affairs 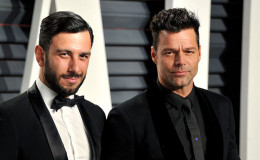 Ricky Martin is in a same-sex marriage with Jwan Yosef and they have twin sons and a daughter together. Before coming out to the world, he dated quite a lot of women and after that, he dated a few men.

Every human in this world deserves equal right to live and to love without any hesitation and fear of societal rejection. Although the world has progressed a lot, there are still leaps to take and changes to bring to make this world a better place for all.

Taking a leap forward Ricky Martin, the famous singer had gotten into a married relationship with his gay husband, Jwan Yosef. His life-changing step has been an inspiration to many and a lesson that there is nothing wrong with being with the one that makes one happy.

Let's take a look at his family life along with details on his wiki, past affairs and kids.

Ricky Martin is living his best life right now as he is in a same-sex marriage with Jwan Yosef. The pair tied the knot at Ricky's native country Puerto Rico but the wedding details are unknown and he revealed about the wedding at The Ellen DeGeneres Show.

Don't Miss: Actor Luke Macfarlane is not dating anyone: Once dated actor Charlie David: Came out as a gay in 2008: Focused on Career: Not ready to have a boyfriend

Not much was known but now Ricky finally opened up about how he met his husband Jwan and about their life. The pair even has twin sons from a surrogate mother and recently became fathers of a daughter too. The lovebirds strive to make their kids proud and full of self-esteem and accept themselves without any fear.

Ricky Martin with husband and kids at the red carpet
SOURCE: Attitude

"I contacted him, and we talked for six months. We were just sending messages, talking about life and existential issues. Nothing sexy, nothing sexual. It's not that he was sending me sexy pictures and vice versa, I swear. But when I first saw him, I said, 'I am going to marry this guy.'And apparently, he said exactly the same thing."

"Obviously, he only told me this, later on, you have to keep it to yourself at first! But I lost my breath when I saw him. Six months' build-up and it was very romantic."

Being homosexual couple, Ricky and his husband are really happy after getting married and the singer chooses to use their visibility and post on his Instagram to inspire other gay men around the world to open up about themselves and be proud.

Talking about his efforts and support for the LGBTQ community.

"We love it! It's not even for us; it's for our kids. It's for my kids to look at us on that red carpet and say, 'Ah, those are my daddies, how cool!' And to boost my children with self-esteem and let them understand how amazing it is to be part of a modern family."

He definitely seems happier and with his noble effort to encourage other gay men to be free of fear, the couple is trying to be the best possible role models for their kids.

Ricky Martin Past Affairs And Rumors

Before he came out and started his good life with his husband, for over 14 years, he was in an on-again-off-again relationship with the Mexican TV host Rebecca de Alba. He recently alluded to her in an interview, saying that she knew about his sexuality while they were together.

“She was amazing, and she was powerful and she knew about me. She knew I was gay, but we were together. It was one of those things, but we broke up around ’97, ’98, and then I just worked.”

He also dated Adriana Biega, an actress, from 1998 to 1999, and he also reportedly dated the Latvian model/actress Ines Misan from 2000 to 2002. Martin has also been linked to stylist Maital Saban and also was said to have had a fling with ‘General Hospital’ star, Lilly Melgar.

Since coming out to the public about his sexuality, he dated quite a number of men too. In 2008 Martin was thought to be romantically involved with Nathan Lane who is an American actor and writer.

There aren't many details regarding the love life of the Latin singer other than their identities as he kept things hidden but since he has finally found the love of his life and settled down, the past hardly matters anymore.