Home Article Rob Dyrdek married Model Bryiana Noelle Flores in 2015 and welcomed their first child in 2016. Is it boy or a girl.

Rob Dyrdek married Model Bryiana Noelle Flores in 2015 and welcomed their first child in 2016. Is it boy or a girl. 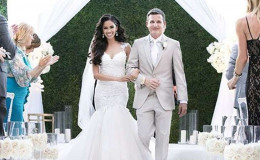 ‘Ridiculousness’ host Rob Dyrdek and his model wife Bryiana Noelle Flores are first-time parents as they have welcomed their son Kodah Dash Dyrek into the world.

On September 9 the 42-year-old television personality announced through his Instagram account that he and Bryiana welcomed a son.

The couple, who married in September 2015, had announced that they were expecting their first child in March.

Dyrdek married Flores, the president of Iconic Beauty and a model, in September 2015.

They got married five months after Rob popped the question to his ladylove in an extravagant proposal at Disneyland in Anaheim, California.

He mentioned that he asked her to marry him during the ‘Aladdin’ musical at Disney’s California Adventure. He said, “There was a bit of a twist halfway through the show that she never expected. I told her I had to use the restroom and slipped out.”

He further added, “When the parade of animals rolled through the audience as usual in Aladdin Show it was her boyfriend at the top of the elephant and not Prince Ali”. It must have been a very romantic moment for them which they will cherish for the rest of their life.

Finally after their fairytale engagement in Disneyland the duo tied the knot in September in an outdoor ceremony surrounded by their family and closest friends.

Both of them has never failed to express their feelings for each other either through their social media accounts or through their interviews they never forgot to mention how much they love each other.

After the birth of their first baby, we can surely assume that their relationship has become, even more, stronger and their son will be the pillar of their beautiful married life.

The couple welcomed their first baby

On March 2016, Rob took to social media to announce that his gorgeous wife is pregnant.

The 41-year-old TV host shared a photo on Instagram and Twitter of himself and wife kissing each other in front of blue and silver balloons that read ‘Oh Boy’.

He shared the photo with a caption ‘I am so happy to announce my beautiful wife is pregnant with our first child. We are so blessed, so happy and look forward to bringing an amazing young boy into this world”.

I could never come up with the words to describe how much I love my wife and son. Family is the ultimate blessing. pic.twitter.com/8SbA3fqxBD

Similarly, Flores also announced her pregnancy news through her social accounts where she wrote, “I can’t help but believe the world really could use more Rob Dyrdek’s. So I feel incredibly blessed and actually proud that we get to bring another great man like him into the world.”

She further wrote, “We love you so much, Baby Boy!! And we can’t wait to meet you.” After that big announcement finally, on September the couple welcomed their baby boy to their world.

Both the couple looked very happy and excited after their son was born and we would like to wish them and their son to have a bright future together.