Home Article Scott Mackinlay Hahn and actress Winona Ryder are dating. Are they getting married?

Scott Mackinlay Hahn and actress Winona Ryder are dating. Are they getting married? 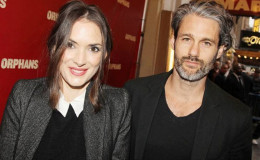 Winona Ryder is a popular American actress. One of the most profitable and iconic actresses of 90s, she made her film debut in the 1986 film Lucas.

The most beautiful and gorgeous actress, Winona Ryder who rose to fame in the 90s with her outstanding performances in movies like Beetlejuice, Heathers, Edward Scissorhands, Girl, Interrupted and much more, is currently dating her longtime boyfriend Scott Mackinlay Hahn.

The actress has remained low profile for quite several years and now she has bounced back with her new supernatural horror series in Netflix called Stranger Things which recently streamed online on July 15, 2016.

Not only that, she has become a hot gossip topic in the media about her exclusive affair with the famous fashion designer Scott. In this digest, we'll find out whether or not the couple has finally decided to get married and start a family.

Are Winona Ryder and Scott Mackinlay Getting Married?

Scott is a fashion designer and co-founder of ROGAN and Loomstate apparel brands. The duo is rarely seen together on the red carpet but during the premiere of Stranger Things, they made an appealing appearance together which drew a lot of media attention.

It seems the couple are having a wonderful time together and are probably taking slow as the duos have not broken any announcement of getting married whatsoever.

Winona was engaged to Pirates of Carribean series actor Johnny Depp, from 1990 till 1994. They remained in a relationship for three years until the actress called it quits in 1994.

Following the split with Johnny Depp, Wino started dating the hot and sexy Hollywood actor Matt Damon in 1998. However, the relationship did not last long and they parted ways after two years of relationship.

Except for them, she's romantically linked to many big names of the showbiz industry including David Pirner, Christian Slater, Rob Lowe, Henry Alex Rubin, and Blake Soper.

Winona: why she does not want to get married?

Ryder, who works only for films that she's passionate about, feels that her happily ever after do not necessarily require a grand wedding. On an interview with ET online, the actress explained why she never put a ring on that finger. She said:

I'm a serial monogamist. I was single for a while and dating and...I just didn't know how to do it! I've always been like that: When I was 15, there was a guy I  liked and we made out, and I thought that meant he was my boyfriend. My mom had to explain it to me!!

She further added that she'd rather never get married than been divorced a number of times and she did not feel that it's something that she would do.

Also, her parents have been married and madly in love for 45 years and that's why her beliefs about love and marriage are quite like a fairytale and she believes if it's meant to be then it will definitely happen.

The notoriously private actress also confessed why she disappeared from the limelights after dozens of award-winning films in the 90s.

She told the sources that it was something she needed to do and she wanted to take a break as it was important to her to have a life outside the industry and constantly getting involved to validate your life was not something she wanted.