Home Article Singer Barbra Streisand and her husband James Brolin's married life and children. Are they getting a divorce?

Singer Barbra Streisand and her husband James Brolin's married life and children. Are they getting a divorce? 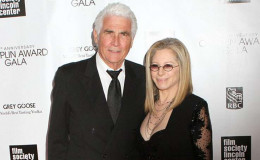 The evergreen and gorgeous singer and actress, Barbra Streisand, age 74, has been married to actor James Brolin for eighteen years. The couple dated for several years before getting hitched. She is happy married life with husband James and son Jason.

As we all know Barba is a muti-talented person and has received numerous awards and rewards during her wonderful career. However, today let us discuss her personal life and find out how wonderful mother and wife is she?

Barbra Streisand and James Brolin dating history: How did they meet?

The actress met her husband James at a dinner party in 1996. Barbra revealed that their interaction began when she complimented James' hair by saying she did not like his hair.

According to her, James fell for her at that moment, because, she told the truth. It took her a couple of months to be sure that James was the one.

Barbra further revealed that she was charmed by his cooking skills. The hunky actor has said that he could cook well, which Barbra could not believe, and thought, 'wow, this is a catch.'

'So he came with a sushi roll, that wooden thing, and made sushi and I love sushi. So, I thought, "This is really great." He has never cooked again.'

It is said 'First impression is the last impression.'Barbra and James started liking each other from the first day and, in a short time, the duo became lovebirds.

After two years of dating, the couple got hitched on 1st of July, 1998. The lovely pair is happy with their relationship and is maintaining a balance between family and professional life with love and care.

Well, it was not the first time for Barbra to walk down the aisle. She was previously married to actor Eliott Gould from 1963-1971.

For James, it is his third marriage with Streisand.

The singer does not have any child with hubby James Brolin

Despite the fact that they have been married for around two decades, Barbra and James do not have any child together.

James is step-father to  Jason Gould, who is an actor, singer, producer, and director. He is the son of Eliott Gould, Barbra's first husband. The couple with son Jason is living a joyous life.

James Brolin has two children from his first and second marriage.

In 2013, their marriage was rumored to be on the rocks because Barbra was too much focused on music and her obsession on son Jason, who was supposed to be HIV positive.

Later on, Barbra herself blasted the rumors, calling it a crap.

'They go into the supermarket, they read this crap — excuse me, but it's absurd,' the 72-year-old singer told Gayle King during an interview in New York City. 'We've been together 18 years.'

'Oh my God we were in the supermarket a few weeks ago, and actually we were holding hands as a matter of fact, and a guy behind us said, 'I'm so glad to see you back together,'' Barbra shared.

'I said, "Really? When did we go apart?" Because he must have read those supermarket tabloids,' she said of the encounter.

Recently, the couple celebrated their 18th marriage anniversary and 20 years of being together. TeamBarbra posted a picture on Instagram of the pair dancing with caption 'Happy Anniversary Barbra & Jim! 20 years together… and 18 years married.'

They surely look very adorable together and even after so many years we could still see their love and passion for each other. We wish them to be like this for the rest of their life.