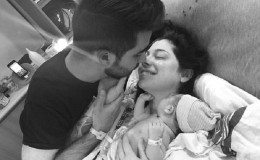 A baby makes them three!

Jar of Hearts singer Christina Perri proudly welcomed her adorable baby girl to this world and the newbie father, Paul Costabile took the news to Instagram, giving the world a glimpse of his perfect family.

After the nine-months long wait, Christina Perri is finally a mother to her first child, a baby girl named Carmella Stanley Costabile.

Christina and Paul welcomed their baby girl on Wednesday, January 17, 2018, and the proud father shared the amazing picture of him holding his better half and baby with the sweetest caption.

The arrival of Carmella broke both of them down in tears as he further wrote,

The newlyweds announced that they're expecting a baby back in August 2017. Perri first met the man of her life during an interview in 2013. Paul who is an entertainment reporter revealed how he fell in love with Christina the first moment he saw her.

I knew I wanted to ask this girl to marry me the day she walked into the green screen for an interview almost 4 years ago. I finally asked her right here tonight and she said yes !!!

The pair made their relationship official in January 2016 and got engaged the following year on June 21, 2017. Soon in December, the low-key couple declared that they got married on December 12, 2017.

on this day four years ago, we met. today, WE GOT MARRIED!!!

In an interview, Paul shared that he wanted to keep the sex of their baby a surprise, a surprise to the world and them too. Paul stated,

"Very much the people I am and Christina is that we’re old souls and old school. In a world of so much technology, we kind of decided to just wait and see what happens because we’d rather be surprised the day of. It’s been an exciting waiting time.'

And the wait is finally over and they welcomed a beautiful baby girl! A big congratulations to this couple.