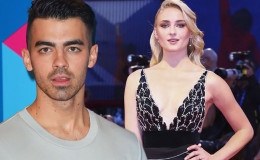 Joe Jonas has been hitting off with several celebrities in his past. This time he is in a relationship with Sophie Turner. The couple seems to enjoy themselves currently and looks like they will in the near future.

Joseph Adam "Joe" Jonas is an American actor and a singer. This handsome singer has been in news all the time because of news with Joe being eloping with many celebrities across the globe. Recently he is rumored to be dating, Game of Thrones superstar, Sophie Turner. Sophie is an English actress who made her debut as Sansa Stark on the HBO's Game of Thrones.

Joe started his career as a singer with the band he and his brother's opened together called Jonas Brother. He was an instant hit all across the globe. Whereas Sophie started her acting career by debuting in HBO fantasy television series Game of Thrones. She recieved many nomination for her critically praised role in the series.

Joe has no short of relationships in his past. He has been in relationship with top Hollywood celebrities like Taylor Swift, Demi Lovato, Camille Belle, Ashley Green, Gigi Hadid and many more. But Joe never had any long lasting relationship with anyone of them.

Joe and Sophie are both rumored to be dating. But the rumor has been called off because the couple are officially in relationship with each other. Although the couple themselves hasn't admitted about their relationship but both of them being spotted together in romantic getaway and pictures in their social account says otherwise.

Sophie who is famous for her role in the tv series called Game of Thrones has her fair share of dating history as well. She previously had three boyfriends, James McVey, Tyre Sheridan and Thomas Mann.

Joe and Sophie date was filled with PDA

The couple were also seen together in many pictures posted by their friends in Instagram.

The couple are having fun with their relationship it seems. They are often sighter together celebrating some festivals or having a blast with their friends and family.

Joe Jonas didn't had any long lasting relationship with anyone. His recent girlfriend was Gigi Hadid. They both went their separate ways after the couple broke up after 5 months of dating each other.

Many of his fans would want Joe to be in good relationship with Sophie Turner. The couple seems like they will last a long long time or are they planning to settle ?. Nothing is not known though.