Home Article Stephen Colbert Is In a Married Relationship Since 1993: Is Having Happy Life with His Wife

Stephen Colbert Is In a Married Relationship Since 1993: Is Having Happy Life with His Wife 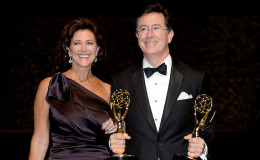 Stephen Colbert is living a blessed married life with wife Evelyn McGee-Colbert. The couple is blessed with three adorable kids.

Stephen Colbert is simply the best in everything he does. He is best known as a comedian and television host among his fans; besides, he's also the best selling author. With the growing popularity and success, how can his family life be out of reach of his fans?

Colbert is, of course, a married man. He is living a happy family life with Evelyn McGee-Colbert for more than 24 years. Let's get details about his personal life in today's session.

Stephen Colbert, 53, knew instantly Evelyn McGee-Colbert was "the one" with whom he can spend his whole life. He shared the story during a live taping of 'The Late Show' in 2016.

He saw the gorgeous lady for the first time in a theater lobby and thought, "Her. That's your wife. You're going to marry her." 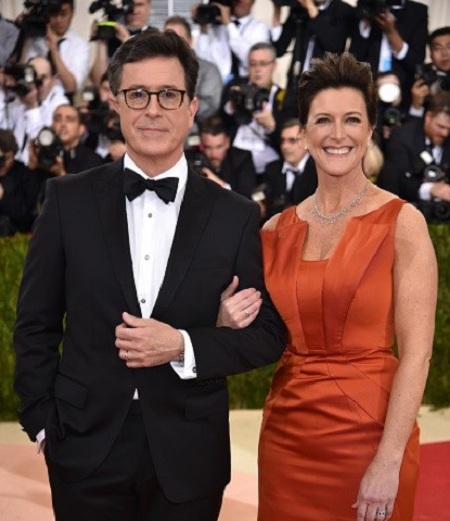 Colbert is living a happy married life with McGee since the year 1993. His wife performed the role of his mother in an episode of Strangers with Candy.

The couple shares an amazing bond together. In February 2017, Colbert brought his wife on stage in an episode of The Late Show and gave her a big kiss in front of the mass and guest Leslie Mann.

We cannot miss the two attending the Met Gala on Monday night in May 2017. She gushed about her husband via Instagram and wrote:

"He’s so sexy. And he taught me the importance of being silly. Being silly is so important. Silly is the opposite of grief. It’s throwing yourself into a moment without care."

"You can’t always maintain your status as a dignified person — it gives you blinders. When you always expect the world to fulfill your expectations, it wears you down. It closes you off. So sexy." 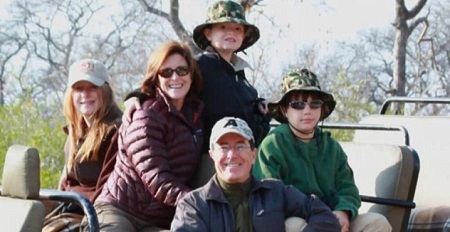 The couple enjoying a vacation with their kids, Source: Daily Mail

When asked about his parenting skills, the star gushed,

"That’s my parenting style — ‘Go watch the TV.’ I’m one of 11 children, and my mother’s parenting style was ‘There’s the TV. Go watch it. Mommy’s got 10 other people to take care of.’"

Colbert and his family live together in Montclair, New Jersey.

Stephen Colbert's Career As a Comedian and TV Host

Colbert is best known among his fans for hosting the satirical Comedy Central program The Colbert Report and the CBS talk program The Late Show with Stephen Colbert.

He was initially interested to be a dramatic actor but gained interest in theatres while attending Northwestern University.

Can I play Goldie Hawn in the Snatched reboot?

He developed the sketch comedy series, Exit 57 with Paul Dinello and Amy Sedaris. Before working in the TV series Strangers with Candy, he wrote and performed on the short-lived Dana Carvey Show.

He worked as a correspondent on Comedy Central's news-parody series The Daily Show. He hosted his own TV show, The Colbert Report; a daily show spin-off that parodied the TV news broadcasting in October 2005.

I was honored to host these service members during #FleetWeek and grab my #selfiewithasailor!

Not only an accomplished host and TV personality, Colbert is also an author. He is a co-author of the satirical text-and-picture novel Wigfield: The Can-Do Town That Just May Not published in 2003.

His book, I Am America (And So Can You!) was listed on number 1 on The New York Times Best Seller list in 2007. 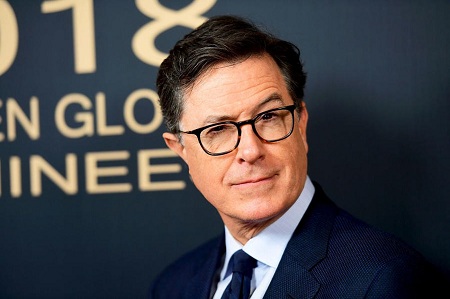