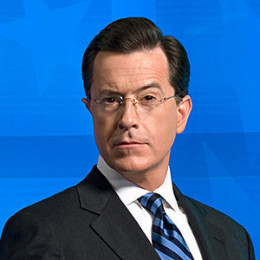 Stephen Tyrone Colbert is an American comedian, writer, producer, actor, media critics, and television host. He currently hosts The Late Show with Stephen Colbert, a television talk show on CBS. Stephen is the son of parents James William Colbert Jr and Lorna Elizabeth. He has 11 siblings and has been active in television since 1984. Colbert has attained a total of two Peabody Awards, two Grammy Awards, and nine Primetime Emmy Awards and has also been named by Time as one of the 100 most influential people in the years 2006 and 2012.

Stephen Colbert was born on May 13, 1964, in Washington D.C. He is the son of parents James William Colbert Jr. and Lorna Elizabeth. He is the youngest among his 10 other siblings. He was born and raised in a Catholic family, while he spent most of his childhood in James Island, South Carolina.

Later, Stephen along with his remaining family moved to a more urban setting where he found difficulty settling and making friends. He graduated from Northwestern’s school of communication in 1986.

Colbert began his career after his graduation. He created a sketch comedy for Comedy Central, named Exit 57, along with his cast members Amy Sedaris and Paul Dinell. The show became a success and ran for two years until 1997.

Later, Colbert joined The Daily Show working as a correspondent. The show gave him wide coverage and eventually, he landed his own show, The Colbert Report in 2005 where he used his satirical humor to comment on the political affairs.

In September 2015, he hosted the CBS talk program The Late Show with Stephen Colbert. Here's the latest clip of his show:

The couple met in the early 1990 and both appeared in an episode of Strangers with Candy, where Evelyn played as Colbert's mother. McGee-Colbert is the daughter of Charleston civil litigator Joseph McGee, of the firm Buist Moore Smythe McGee. Prior to this, Colbert had an affair with an American singer, Charlene.

During his college and Second City years, Colbert suffered from bouts of depression and anxiety, for which he had to be medicated. Colbert's mother died at the age of 92 on June 12, 2013, after a period of ill health.

During a 2018 interview, he revealed with Rolling Stones about his struggle with anxiety and depression.

"I needed to be medicated when I was younger to deal with my anxiety that I had thrown my life away by attempting to do something that so few people actually get away with, or succeed at."

Furthermore, he emphasized and explained how it affected his married life.

"I was actually medicated. I mean, in the most common, prosaic way. Xanax was just lovely. Y’know, for a while. And then I realized that the gears were still smoking. I just couldn’t hear them anymore. But I could feel them, I could feel the gearbox heating up and smoke pouring out of me, but I was no longer walking around a couch."

His wife helped and supported him a lot to fight back all the issues.

Stephen Colbert's net worth is estimated to be $45 million.

His source of income includes his earnings from his career as a comedian, writer, producer, actor, media critics, and television host. He reportedly pockets an annual salary of $6 million.

Stephen Colbert is hitched to Evelyn McGee-Colbert in 1993 and has three kids named, Madeleine, Peter, and John. The couple met in the early 1993 and both appeared Strangers with Candy, where his wife played as his mother.