Home Article Actor Cory Hardrict gives all the credit of his success to wife, Tia Mowry

Actor Cory Hardrict gives all the credit of his success to wife, Tia Mowry 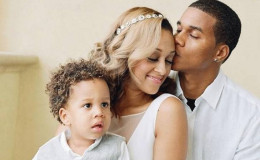 In a nutshell, Tia Mowry and Cory Hardrict are living happily with their child and they have no other children and there has no rumors about their divorced yet and they both are loving and carrying couple till.

Tia Mowry is an American actress and a model. She gained immense popularity from her role as Tia Landry on the ABC sitcom 'Sister, Sister.'

Tia is a happily married woman who tied the knot with her longtime boyfriend Cory Hardrict in 2008. They have a son together.

The day when Cory Hardrict shot his first movie, American Sniper he met his future wife Tia at the bus stop. She was there with her twin sister.

They started taking and ride the bus together. They took him to Inglewood and that’s how their friendship started.

After knowing each other and spending time together they started dating and now we all know they end up getting married together.

After six years of dating, the duo got engaged on Christmas 2006. After nearly, 2 years of engagement the love bird got married on April 20, 2008, in Santa Barbara, California.

They love each other and support their respective career. The lovely husband-wife duo is living the best time of their life with no rumors of a divorce.

On January 11, 2011, it was announced that Hardrict and Mowry were expecting their first child. Her pregnancy news was first revealed at Mowry’s reality TV show called 'Tia and Tamera.' The lovely couple has continued to prove that romance is the key to a forever love as they are often seen flirting with each other.

Man, 2016, your time has come to an end. As I get older, I start to realize that time stops for no one. Therefor, embracing life and what it brings is vital. For that, I am #grateful. #Grateful for my family, friends, love, peace, and all the things that life brings my way. The good and the bad. Here's to an amazing #2017! Life is to be lived!

A special shout out to this man @coryhardrict! I thank God for you. You help guide and steer this family. We thank you for your strength, faith, and heart. Love you baby and here's to #2017!

'A happily ever after is not a fairy tale it's a choice' and Tia and Cory are the living examples to prove this statement.

In one of the interviews, Cory discussed his past struggling days and how his wife supported him. He said, “I had odd jobs. I worked at K-Mart, graveyard shift, security. That’s when I was just grinding man,”

Hardrict further added, “I met my wife during those days. She was with me. She was just coming out of Sister, Sister, but they had everything man and I did not have anything."

He further explained how his partner helped him to get rid out of that mess. Today he is successful and rich and he gives all that credit to his ladylove.

Currently, the couple is living happily married life with their daughter. We wish them, to have a prosperous life ahead.