Home Article Travis Browne is dating Ronda Rousey, Are they getting married?

Travis Browne is dating Ronda Rousey, Are they getting married? 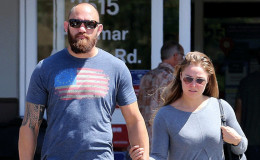 Travis Browne and Ronda Rousey are two strong individuals. Travis is a UFC champion and his current girlfriend Ronda is a former UFC player. They began dating when Travis was still married to his first wife Jenna Renne Webb.

He has a long history regarding his wife and the divorce. He was accused of violence towards his first wife and even was disqualified from one of the matches in UFC. Let's move ahead and know about the gossips behind Browne's life story.

are Travis and Ronda dating each other?

We can assume that both of them met in the UFC as both are associated with it at some time or another. The couple was even rumored to be engaged.

On January 2016, news flashed that Ronda was wearing an unusual diamond ring on her finger which appeared to be some kind of promise ring.

There was a viral tweet going around the internet which was by his ex-wife Jenna who tweeted “IS RONDA WEARING A PROMISE RING? AS IN I WILL NOT HIT YOU LIKE MY CURRENT WIFE” RING?

She even said that they were still married and also slammed Ronda by calling her a hypocrite.

Even though her accusations the couple who weren’t even in a legit relationship, didn’t seem to mind her sharp comments at all, the same day the two were spotted by media roaming around New York streets with the big smiles on their faces.

Travis marriage, his wife, and the divorce

Browne married Jenna Renne Webb in January 2015. They also have two children together.

Six months later her wife shared pictures of bruises in her body through her official Instagram page. Accusing husband Travis that it was his misdeed.

Soon after the picture went viral Browne was detached from the UFC International Fight Week in the course of investigations, but soon he was back in the game as there was no concrete evidence of the incident to be found.

They got divorced in February 2016. Before being officially divorced, he started dating Ronda and they were alleged to be engaged too.

Heavy in the physical appearance, Travis Browne is a mixed martial artist of American sports field. The 34-year-old Travis also competed in the basketball tournaments in his early age.

He was then introduced to martial arts after being known to Brazilian Jiu-Jitsu. At that time he was 26-year- old. At the same year, he trained for boxing and even played a match.

In 2009, he began his career fully in MMA and started paying in small championships. He quickly began learning and gained popularity in that field.

A year later he signed for UFC and was soon playing The Ultimate Fighter. Till today he is fighting in UFC Fight Nights.

Ronda Rousey who is a former Women’s Bantamweight Champion and an actor and a Judoka was born in Riverside, California.At the young age of

At the young age of 11, she started training for judo with her mother. Afterward, in her adult life, she played for the UFC.

Even after so many controversies they are still together and we really wish for them to end up together.