President Donald Trump is strongly defending himself against Senator Kirsten Gillibrand who suggested he resign from the presidency. Gillibrand suggested Trump's resignation from the cabinet over the sexual allegations against him by multiple women.

Trump Attacks Senator Gillibrand After Call for His Resignation, Claiming She'd 'do anything' For Campaign Contributions

President Donald Trump is not backing down with all the sexual allegations latched on him and Senator Kirsten Gillibrand is suggesting he resign from his presidency.

Trump has strongly denied all the allegations, standing strong calling everything fabricated, describing the Senator Kirsten Gillibrand of NewYork is leading critics and someone who "would do anything" for campaign contributions calling her "Lightweight". 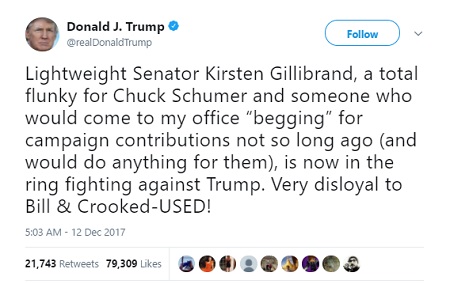 The President backfired the Senator stating that she would come to his office "begging" for the campaign and now she's fighting against him, calling her disloyal. 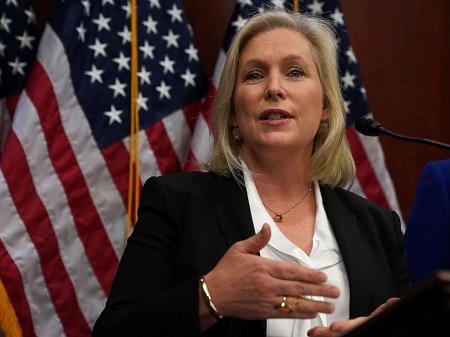 Senator Gillibrand went public with her allegations in The Palm Beach Post during the presidential campaign
Source: abcnews.go.com

The news hyped on the media after more than a dozen of women came forward and accused the 71-year-old Republican of sexual misconduct and assault. Just this Monday, four women- Melinda McGillivray, Jessica Leeds, Rachel Crooks and Samantha Holvey joined hands coming forward against Trump and demanding a congressional investigation into Trump.

McGillivray made a statement on Megyn Kelly's show Today saying,

"I demand that he is subjected to an investigation by the Ethics Committee. It's important that we hold this man to the highest standards. If 16 women have come forward, why hasn't anything been done? Where is our investigation? I want justice."

Despite thousands of hours wasted and many millions of dollars spent, the Democrats have been unable to show any collusion with Russia - so now they are moving on to the false accusations and fabricated stories of women who I don’t know and/or have never met. FAKE NEWS!

McGillivray stated in claims that Trump groped her rear end in 2003 while attending a concert at Mar-a-Lago. The committee's Chairman Trey Gowdy and ranking member Elijah Cummings received the letter signed by all while Trump accused Democrats of using false and fabricated allegations to attack him.